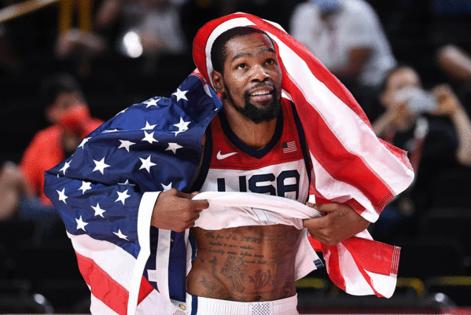 Especially when you have Kevin “King Dominator” Durant on the squad.

So there was really no need to push the panic button. We all should have known that, but after Team USA lost in exhibition play and then lost its Olympic opener to France, Americans back home started to wonder what was going on.

Even Team USA was upset. Durant called a players-only meeting.

“I’ve never lost with Team USA before,” Durant told the media after winning the gold medal in Tokyo over the weekend and becoming USA’s all-time leader in scoring and 3-pointers made in Olympic competition. “Taking a loss was tough. When you have a team meeting, you’re at the bottom. We worked our way up from there.

“A lot of people back home doubted us. When you hear the noise so much, we came together and finished it off with a perfect ending.”

Indeed, from there, the worry was put to rest. KD single-handedly took over these Olympic Games. He was a man among boys and the biggest reason why the Americans can still tell all other international teams, “Don’t bring that weak stuff in here.”

TOKYO — The most anticipated athletic performance of these Olympics became a metaphor for the Games themselves.

Days after Simone Biles dropped out of the gymnastics team final because she suddenly lost the ability to ...Read More

TOKYO — There’s barely even time to pack up the five Olympic rings — symbols of unity, competition and controversy — before they’ll need to be dusted off for the 2022 Winter Games in Beijing.

TOKYO — Keyshawn Davis watched the fight on television in a hallway adjacent to the ring inside historic Kokugikan Arena. He wore a white Team USA track suit, blue Nikes and a silver medal around his neck. It was the ...Read More