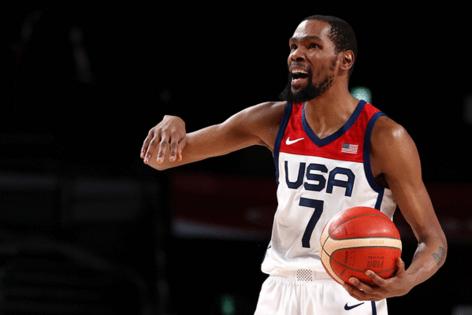 SAITAMA, Japan — With two gold medals to match his two NBA championships with the Golden State Warriors, Kevin Durant had nothing to prove by playing in his third Olympic basketball tournament.

After sitting out the 2019-20 NBA season to recover from the torn Achilles' tendon he had suffered during the 2019 Finals — and after playing only 35 games for the Brooklyn Nets in the reconfigured 2020-21 season — it would have been reasonable for Durant to skip the Tokyo Games and avoid subjecting his 32-year-old body to additional travel and stress. LeBron James, Anthony Davis and Stephen Curry are among the superstars who stayed home. Given the COVID-19-delayed ending to the NBA season, their decisions didn't stir much of an outcry.

But U.S. coach Gregg Popovich was prepared to put aside his pride — no easy task for the longtime San Antonio Spurs coach — and go to extremes to get Durant to commit to playing in Tokyo.

"If he said no, I would have begged, cried, done anything I could to change his mind," Popovich said during a pre-Olympic training camp in Las Vegas in July. "That's pretty obvious. But what it says about him, number one, is that he loves the game. He really loves to play basketball. He loves to win. He loves the camaraderie. He wants to be part of this all the time, as we all know. And that's his motivation.

"At the core, that's what he loves to do. And luckily for all of us, that's who he is. So it's a testament to his character and just desire to be part of a team and have a challenge and seek the success."

Durant is not only here, he's fully present and ready to seize control of games when necessary. His eagerness is a key reason the U.S. men have found their footing in knockout play and are once again gold medal favorites.

"We all know who he is — he's probably the best player in the world," Damian Lillard said. "That height [6-foot-10], that athleticism, nobody can stop him."

Durant didn't panic when Australia jumped out to a 15-point lead in the second quarter of the semifinal game on Thursday at Saitama Super Arena. As the Americans tightened up defensively and were energized by Jrue Holiday's sure shooting, Durant scored eight straight points to set a decisive tone early in the third quarter. He asserted himself at both ends of the court in the U.S.'s 97-78 comeback victory, which put the U.S. in the gold medal game on Saturday against France.

The Olympic spirit isn't a sappy slogan or cliché to Durant. It's real.

"One hundred percent, and that's not just on the court," said Devin Booker, whose 20-point performance was second only to Durant's 23 points. "We get that same spirit and that vibe and that energy from him off the court. He's been in the situation before, and he's leading us as such.