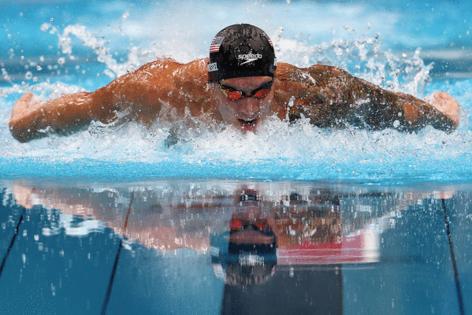 TOKYO — A few minutes before Caeleb Dressel ambled out of the ready room, an up-tempo song pounded through the Tokyo Aquatics Centre.

“This is my time now,” the urgent words from 7kingZ said. “It’s all on the line now. Destiny is mine now.”

The lyrics were prophetic.

After a week in which Dressel fought off nerves, set a world record and shed tears as he reinforced his place as the world’s pre-eminent male swimmer, what the 24-year-old did Sunday might have been the most impressive feat of all.

Dressel crushed the field in the 50-meter freestyle to win his third individual gold medal, then returned to the pool a little more than an hour later to help the U.S. men’s 400 medley relay upset Britain and break the world record on the final day of the swimming competition at the Summer Games.

The victories gave Dressel five gold medals — Michael Phelps and Mark Spitz are the only men’s swimmers to have collected more golds during a single Olympics — as he became the first man to capture the 50 freestyle, 100 freestyle and 100 butterfly in the same Games.

“It’s not my goal to beat anybody in particular, it’s about achieving what I think my potential is,” Dressel said. “My goal is not to be Michael. It’s not to be Mark.”

Although Dressel entered the nine-day competition positioned as the natural successor to Phelps, the most decorated Olympian of all time who is retired, the weighty expectations didn’t faze him.

“He had a lot on his shoulders,” teammate Ryan Murphy said.

Dressel did things his way as Phelps provided color commentary for NBC.