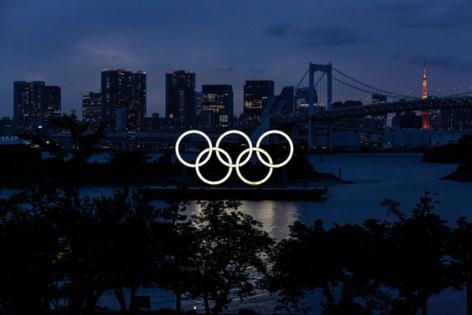 TOKYO — Dangle some shiny objects in front of them and maybe they’ll forget about the coronavirus.

That's basically how International Olympic Committee spokesman Mark Adams described the process of winning over the locals, who wanted these Games to be canceled or postponed again, according to recent polling.

Asked Friday whether he sensed a shift in Japanese attitudes towards the Olympics, Adams mentioned the host country's gold medal count, which several hours later reached a national record: 17.

"I think that will have a big effect," Adams said at a news briefing at the Olympic Main Press Centre.

To his point: The broadcasts of some events won by Japanese athletes earned market shares of more than 20%.

If Adams sounds as if he's trying to downplay or ignore the pandemic, it's probably because he is. And he's not alone, as the stakeholders of these Olympics are doing what they can to convince the public the Games have nothing to do with the explosive spread of the coronavirus.

The pandemic has worsened considerably since the Games started, with Tokyo exceeding 3,000 new reported cases of coronavirus each of the last four days, including a single-day record of 4,058 on Thursday. The coronavirus is also spreading through the Olympic bubble, in which 21 new cases were reported on Saturday.

Medical resources are already stretched, with the majority of hospital beds in Tokyo for serious COVID-19 cases occupied.

Prime Minister Yoshihide Suga, who extended and expanded the country's state of emergency on Friday, has insisted what's happening in the Olympic bubble is unrelated to what's happening on the outside. Japan's most strident backer of these Games, Suga has come under heavy scrutiny for his insistence on staging the Olympics in the middle of a global pandemic.

Predictably, the Japanese media has started laying the groundwork to blame foreigners for this health crisis. Images of Georgian wrestlers visiting the Tokyo Tower were widely circulated, leading to their expulsion from the Games. Olympics broadcast rights holder NHK recently ran a story on its website about foreign journalists violating protocol by eating and drinking alcohol together at their hotel.