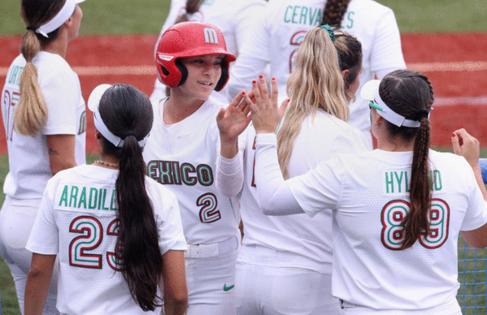 TOKYO — On July 4, Mexico’s Olympic Committee tweeted several photos of its softball players giving thumbs up to the delivery of their official apparel for the Tokyo Games, with stacks of boxes in the background.

On Thursday in Tokyo, the gear was pictured on Twitter again — in trash bags on the floor of the Athletes Village.

Two female Mexican boxers posted photos on Twitter of the softball team’s red, white and green Olympic clothing stuffed into clear bags with other garbage, adding messages critical of the players who left them behind. All but one member of the 15-woman roster was born in the United States, and all 15 played softball at NCAA Division I universities, including pitcher Danielle O’Toole and outfielder Stefania Aradillas at San Diego State.

The players, most of whom have returned to the U.S., remained quiet on social media. Rolando Guerrero, president of the Mexico Softball Federation, spoke in an interview with Olympic broadcaster TV Azteca, saying players were issued nine sets of apparel — three each in red, white and green — and they were unable to pack them all without incurring overweight luggage charges at the airport, particularly with their bats, gloves and cleats.

Most flew Japanese airline ANA, which allows two bags up to 50 pounds each in economy class. Excess baggage charges are $60 for 20 pounds over and $200 for anything beyond that.

Mario Garcia, Mexico’s head of delegation in Tokyo, wasn’t so understanding. He launched an investigation and said he will consider sanctions against any offending parties.

“I do feel it is an offense to our national identity,” Garcia told Mediotiempo. “We would have liked it not to have happened, because the Mexican Olympic Committee defended that biculturalism that the team had.”

Mexico finished fourth in the six-team tournament in its Olympic softball debut, losing 3-2 against Canada in the bronze medal game that was played Tuesday afternoon in Tokyo (late Monday night Pacific time). Athletes are required to depart Japan within 48 hours of their final event, and boxers Brianda Tamara and Esmeralda Falcon posted photos on social media of what they left behind.

“This uniform represents years of effort, sacrifice and tears,” Tamara tweeted in Spanish with accompanying photos. “All Mexican athletes yearn to wear it with dignity, and today the Mexican softball team sadly left it all in the garbage of the Olympic village.”