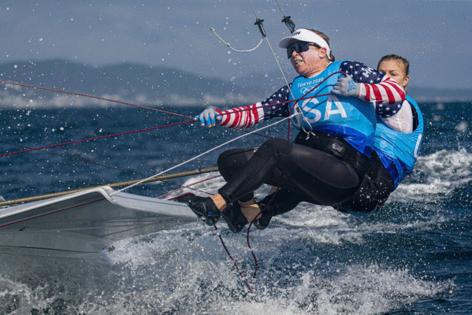 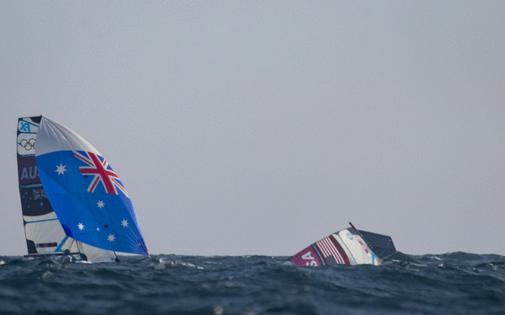 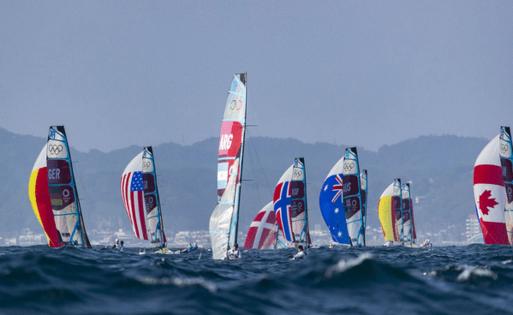 FUJISAWA, Japan — Wilmette, Ill., native Maggie Shea had been telling herself this was just another sailing race in a lifetime of sailing races.

Then she saw her boat.

Per tradition, the skiff was rebranded with the Olympic logo and “USA” along the side. The gennaker sail, which typically bears a sponsor’s logo, was now emblazoned with a 270-square-foot American flag.

Shea put her arm around her teammate, Stephanie Roble, and took in the moment. Friends since they were teenagers on the Midwestern racing circuit, the duo marveled at what they had achieved as a team.

“We’ve been sailing together for so long and to have done it together and have that moment was really cool,” said Roble, who lives in East Troy, Wis.

Roble and Shea are in eighth place following two days of racing in the 49er FX skiff class and remain in the mix for a medal. They capsized near the finish line of their final race Wednesday, costing them valuable points in the standings — but not their good spirits.

There were no grim faces or tense body language after the race, just an acknowledgment that they have something to figure out together. In the biggest competition of their lives, the childhood friends are relying upon the communication skills that have bolstered their professional partnership and kept their personal friendship in tact since the start of their Olympic campaign five years ago.

“Even though we’re genuinely great friends and we enjoy spending time together, we still have to work really hard on our team dynamic,” Shea told the Chicago Tribune before leaving for Japan. “It’s a skill set we need to work on just as much as our boat handling and fitness.”

Over the years, the pair has worked with a sport psychologist on stress management, mental toughness and their relationship. In addition to being personal friends and teammates, they’re also business partners who must raise money for their sailing expenses and then decide how to best spend it.

It can be a heavy strain on even the closest of friendships, so Roble and Shea make an effort to protect theirs.