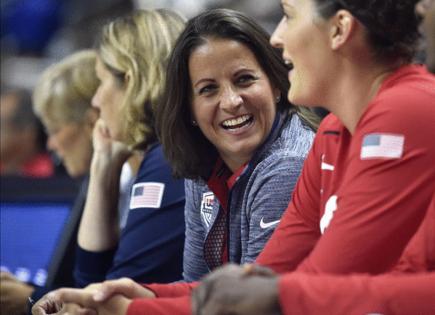 Serving as an assistant coach to the U.S. women’s basketball team at the Olympics is an honor and a dream come true for Jennifer Rizzotti, the former UConn standout and now Connecticut Sun president. But while her new role with the WNBA team marks a career shift away from coaching, Rizzotti hopes that Tokyo won’t be her last involvement with USA Basketball.

“I’ve kind of always taken it one step at a time,” Rizzotti said from Tokyo Thursday when asked about her future with the organization. “With me taking on a new role with the Connecticut Sun it removes me a little bit from the coaching responsibilities. Obviously, I don’t really know who will take over [as national team director following the resignation of Carol Callan] but whoever does, I’m sure when that phone rings and it’s somebody from USA Basketball, and they want any kind of involvement from me to help with their national team, it’ll be hard for me to ever say no.”

Rizzotti has held a host of jobs with USA Basketball since she first got the call from Callan in 2006 to get more involved with the wildly successful program. Most recently, she’s been an assistant for the 2019-20 national team, the 2019 and 2021 AmeriCups and the 2018 World Cup. In previous cycles, she was a scout for the 2016 Olympics and 2014 World Cup and coached various youth national teams. She now chairs the women’s junior national team committee.

Rizzotti was named president of the Sun in April, a month after she was fired from her coaching job at George Washington. The Mohegan Tribe was willing to accommodate Rizzotti’s USA Basketball duties this summer, which she took on well before joining the Sun.

“It’s very exciting and it’s a tremendous honor,” Rizzotti said. “This time is special because I get to sit on the bench, I get to have an impact in that capacity, still get to do my scouts, which I love to do, and prepare the team.”

Her winding journey from coaching at the youth level, to scouting for Rio, to being part of the senior national team staff makes Rizzotti’s place on the sidelines at the Olympics and potentially winning gold all the more special. With her experience scouting international teams, Rizzotti is quite familiar with many of the upcoming opponents, a specialty she feels makes her an asset.

“I’ve just tried to prepare myself for this moment,” she said. “I think it became more of reality as I got involved in 2014 with the national team, and I’ve just made sure to make an impact and be somebody who’s indispensable by really working hard, sharing my knowledge and preparing the team the best way that we can to win.”

The U.S. can make history if it takes home gold in Tokyo, tying the U.S. men’s basketball team’s streak of seven consecutive golds from 1936-1968. Team USA is coached by Dawn Staley, a gold-medal winning point guard as a player and the current coach at South Carolina. The other assistants are Minnesota Lynx coach and general manager Cheryl Reeve and former Seattle Storm coach Dan Hughes.

“Doing it with Dawn as the Olympic coach is an honor for me,” said Rizzotti, a point guard herself in her playing days. “I’ve been motivated from the beginning to help her win another gold medal, this time as a coach. She’s inclusive. She asks our opinions all the time, and she really lets us, as assistant coaches, put a stamp on this team and on the games that we play and that makes it even more special.”

It’s fitting that Rizzotti’s Olympic experience will take place in her former home. Long before her days as a Husky, Rizzotti spent her middle school years in Tokyo, where her father was transferred for work.

So there are a number of reasons why this might not be a bad way for Rizzotti to tie a bow on her chapters with coaching and USA Basketball, if this really is it. She gets to return to Japan, coach alongside her mentors and work with players she’s formed lasting relationships with, all while potentially making history.

“I have relationships across the board, and it’s a first-class organization,” Rizzotti said. “So I always want to be a part of the success of USA Basketball, whatever role that is.

“I’ll always be willing to say yes if there’s a way for me to help. Right now, I don’t know what my future holds as far as coaching. If this is the last opportunity that I have to be on the sideline as a coach, it’s a pretty good one.”