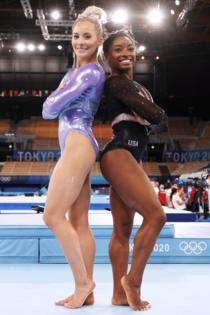 TOKYO — The competition floor stretched out behind them and tantalizing possibilities danced in front of them as MyKayla Skinner and Simone Biles smiled for the cameras on Thursday at Ariake Gymnastics Centre. On Sunday, when team qualifying takes place, they will be tumbling and twisting and flying toward medals at the Olympic Games. First, they paused to celebrate the moment, standing back to back in mirrored poses.

The caption Biles chose when she launched the photo into the social media world was surprising: "Little did you know OG means Olympic Grandma's."

These "grandmas," both 24, are not the only medal contenders competing at an age once considered elderly in the sport. Compared to 46-year-old Oksana Chusovitina, who's extending her own gymnastics Olympics appearance record to eight, Biles and Skinner are kids.

Chusovitina, who won team gold in 1992 with the Unified Team and silver in the vault in 2008 while representing Germany, has hinted at retirement before. She vowed these will be her final Games because she wants to spend more time with her son Alisher, who will be 22 in November. "She feels very good. Very happy that this is her last Olympics. At same time she feels good, she feels bad," a translator said about Chusovitina's emotions.

A sport that once put a premium on the acrobatics of tiny, teenaged sprites has become more welcoming to women who are in their 20s, and it's refreshing. Energy and difficult tricks are entertaining, but there's a lot to be said for the maturity an "older" gymnast can bring to a performance.

"I think it's a good thing that gymnasts are getting older and making the sport a little bit more adult," said Sanne Wevers of the Netherlands, 29, who won gold on the balance beam at Rio in 2016. "It's more professional and a little bit less like a children's sport."

Former UCLA standout Danusia Francis, 27, was an alternate for Britain in 2012 and will represent Jamaica here. She thought her gymnastics career had ended when she became a Bruin, but she returned to the more demanding international-level competition with more control over her training.

Staying in the sport has punished her body — she injured her knee shortly before the Tokyo Games — but she has learned how to cope. "Back in the day everyone was doing hundreds of routines but now you take a day off and you recover and that's actually helpful. It's really good for you," Francis said.

Canada's Ellie Black, a three-time Olympian at 25, attributed gymnasts' newly lengthened careers to improved equipment and a shift away from the notion that training sessions had to be long and grueling.