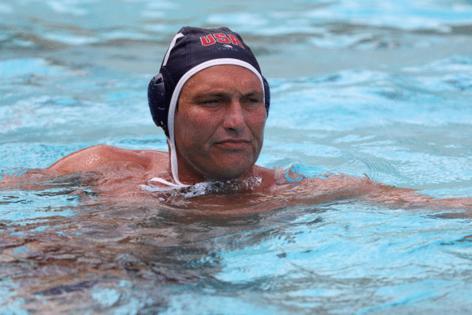 TOKYO — In a development that makes the inclusion theme of the Tokyo Olympics seem insincere, Jesse Smith, captain of the U.S. men’s water polo team, went from a potential flag bearer for his country to being shut out of the opening ceremony.

One of the nominees for the Team USA flag-bearer role that went to Eddy Alvarez, Smith was forced to watch the Games’ signature moment from the athlete village because of rules allowing only 12 of the team’s 13 players to walk with their countrymen.

Designated as the team's alternate for its Olympic opener against Japan on Saturday, Smith was also the odd man out for the opening ceremony.

"Individually, it's really tough to deal with adversity," Smith, a five-time Olympian from Coronado who starred at Pepperdine, said several hours before the opening ceremony, "but that's why we're Olympians.

"I would love to go to the opening ceremonies — it didn't work out, we weren't able to figure out a way, but fortunately it happened to me; this is my fifth Games, I've walked before and I'd love for my kids to be able to see me on TV and see my teammates, so they're going to go and I'll be cheering them on from the village."

Smith, part of the silver-medal-winning team at the 2008 Beijing Games, said the team appealed the decision to Olympic officials, to no avail.

Dejan Udovicic, the U.S. team's coach, described his making Smith the alternate against Japan as a strategic move designed to enhance his team's chances.

"My personal decision is that in that game we need more different players than the center defenders," Udovicic said, "because they're not playing the game for the center, so the situation to me was a clear one."

Udovicic praised Smith's leadership and said he would play later in the tournament, including the third game against Italy. But Smith didn't get to walk with his teammates in the opening ceremony of his farewell Games.

Smith said he had already begun transitioning to a career in business and would not play in the 2024 Paris Olympics.

"It's definitely it," Smith said of the Tokyo Games.