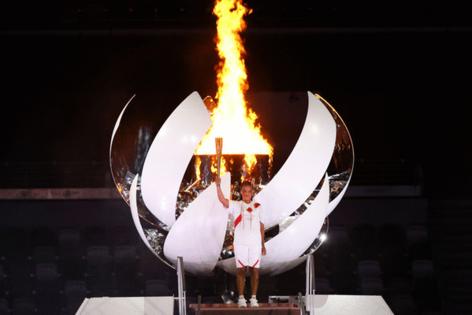 TOKYO — Here’s what you should know about Arisa Tsubata, the woman who ran on a treadmill at the beginning of the Olympic opening ceremony Friday.

She is a nurse who worked at a Tokyo hospital throughout the pandemic.

She is also a boxing champion who was on track to make the Japanese team when COVID-19 hit and organizers postponed the Games. When the delay forced her sport to change its qualifying criteria, her dreams of making the team ended.

Tsubata has had a difficult year.

So it seemed only fitting that she would be the breakout star of the most somber opening ceremony in recent history.

Tsubata’s personal story, like the opening ceremony, reflected the melancholy that threatens to envelop these Olympics. It’s a sadness specific to these Games and to the world as a whole, with neither being easy to rectify.

The International Olympic Committee insists on calling this event Tokyo 2020, as if the last year never happened. There’s no erasing the devastating impact of a pandemic, particularly in a largely unvaccinated country where the number of confirmed cases continues to climb.

Since organizers postponed the competition last year, more than 4 million people worldwide have died from the coronavirus. Reminders of COVID-19′s deadly impact were seen everywhere during the opening ceremony, from the empty seats and signs banning singing to athletes entering the stadium in masks.

First responders played key roles throughout the ceremony. In addition to Tsubata, frontline workers carried the Olympic flag into the stadium and helped carry the torch inside.

One the morning of the ceremony, one of Japan’s most respected newspapers published an editorial blasting the Japanese government and the IOC for holding the competition when polls show as many as 68% of the public doubted the event could be held safely. The headline pulled no punches, referring to “gloom and doom” in the air.