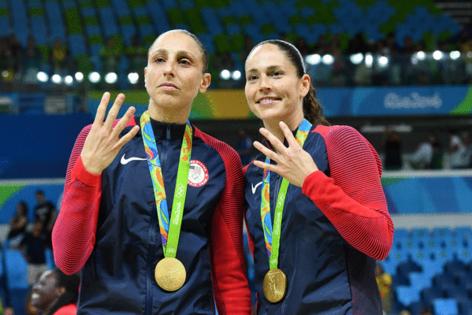 Winners of six consecutive gold medals, the U.S. Olympic women’s basketball team has achieved a level of consistent dominance rarely seen in sports. But that won’t make their quest for gold at the Tokyo Games any easier.

Unlike other countries’ programs, the U.S. didn’t get weeks or months to play together ahead of the Games, with the 12-player roster first convening last week in Las Vegas for an abbreviated training camp. The COVID-19 pandemic continues to ravage Tokyo, making for an Olympics unlike any even the likes of national team mainstays Sue Bird and Diana Taurasi have ever experienced. And this particular U.S. Olympic team features a substantial number of newcomers (six) and is shifting its style of play from the last few cycles.

None of that can shake USA Basketball, though. The gold-medal standard set in 1996 and holding steadfast ever since remains the same.

With a first-place finish in Tokyo, Team USA can make history by joining U.S. men’s basketball as the only programs to win seven straight gold medals in traditional team sports. Its journey begins Tuesday at 12:40 a.m. ET with its opening game against Nigeria in pool play.

The U.S., No. 1 in the FIBA world rankings, may be overwhelming favorites on paper, but that presumption faltered some last week when Team USA went 1-2 in exhibition games. Most eyebrow-raising was their 70-67 defeat at the hands of No. 2 Australia, which was without WNBA All-Star center Liz Cambage.

Team USA ended the week on a good note, though with a 93-62 rout of Nigeria.

“I just felt like the way that we were playing on Sunday was different from the previous games,” two-time Olympian Breanna Stewart said. “We were the aggressors early and often and we pounded the ball in the paint, and then from there we were able to get whatever we wanted on the outside. I think that we had a lot of poise and composure and really just found the open person.”

“I feel like we’ve learned a lot,” said Jennifer Rizzotti, an assistant coach for the U.S. and president of the Connecticut Sun, of the training camp as a whole. “That’s kind of typical that there’s a pretty quick learning curve with a group of this caliber. But just keeping in mind that there’s six new Olympians, and that’s not usual [the 2016 team had three first-timers, the 2012 squad had five]. I think everybody seems a little more relaxed, especially after the win versus Nigeria last week.”

The Nigeria win offered a clearer picture of what the U.S. identity is. It’s about taking advantage of its post dominance, a shift from the more guard-centric Geno Auriemma years. Team USA’s starting front court features seven-time WNBA All-Star Brittney Griner, reigning WNBA MVP A’ja Wilson and, playing out of position as a small forward, Stewart, one of the world’s most decorated athletes.

Their second unit is just as strong with Tina Charles, who’s on track to break the WNBA’s single-season scoring record, and Sylvia Fowles, who at 35 remains one of the most dominant low block posts and defensive forces in the world.