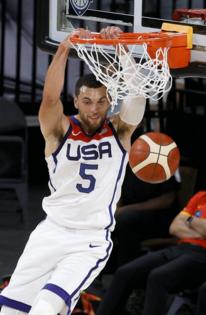 CHICAGO — After a testing issue resulted in a brief stint in health and safety protocols for COVID-19, Zach LaVine was scheduled to fly to Tokyo and rejoin Team USA on Thursday afternoon.

LaVine should be cleared to practice with the team Friday and be ready to play in the opener against France Sunday. The men’s national basketball team is finally getting whole after a rocky exhibition season — they dropped their first two games against Nigeria and Australia before rebounding with a pair of wins over Argentina and Spain — and LaVine has taken on a larger role with each game.

LaVine was third on the team — behind Damian Lillard and Kevin Durant — in scoring with 10.8 points per game on 53% shooting, and moved into the starting lineup the last two games.

LaVine arrived in Las Vegas for training camp with Team USA with a noted eagerness, ready to play any role the team required of him. The roster is filled with players capable of scoring in bunches, so LaVine seemed ready to fill in the gaps like a role player, committed to playing defense, making hustle plays and providing energy off the bench.

But after sporadic playing time in the first two exhibition games, LaVine became much more of a fixture in the last two. He was inserted into the starting lineup in place of an injured Jayson Tatum and then again after Bradley Beal left the team after entering the health and safety protocols.

“It’s whatever they need me to do. Obviously if they need more scoring, I think everybody knows I can do that,” LaVine said with a laugh. “I’ll be fine with whatever role they give me.”

Coach Gregg Popovich has cautioned about reading too much into lineups, saying he wanted to experiment with different combinations, but Beal’s absence should offer an opportunity for increased playing time for LaVine. In Game 1, LaVine played 21 minutes off the bench before playing in just 13 minutes in Game 2. But as a starter the past two games, he logged 24 minutes in Game 3 and 22 minutes in Game 4.

“First game, I really wanted to go out there and impact the ball on defense. Pick up the energy, pick up the pace. Took my shots when they were there. Second game, got some spot minutes,” LaVine said.