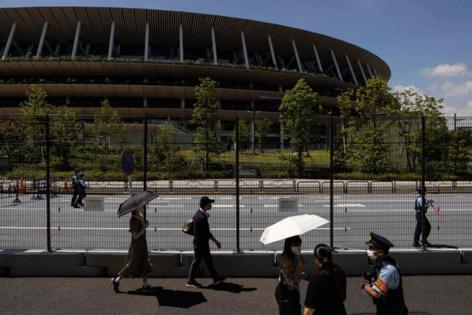 TOKYO — Olympic rowing and canoe races will be held on the Sea Forest Waterway, a 2,000-meter course in a narrow channel that connects to Tokyo Bay. Because it doesn’t have natural banks that absorb choppy water, organizers devised a wave dispersal system of more than three miles of special cylindrical buoys.

Like everything else at the Summer Games that open Friday night in Tokyo (4 a.m. Friday San Diego time), they were installed in plenty of time.

But then they started to sink.

Organizers pulled them up to discover thousands of magaki oysters, an expensive delicacy in Japan, had attached to the buoys and had grown so large that their weight tugged them underwater. Divers were dispatched, and the removal job cost $1.3 million. And the oysters? Because of pollution concerns, they were discarded and couldn’t be sold.

It has become a fitting metaphor for these spectator-less Olympics held in the teeth of a pandemic: gradually sinking while potential revenue can’t be realized.

“What will these Olympics be for and for whom?” Kaori Yamaguchi, a member of the Japanese Olympic Committee and a 1988 bronze medalist in judo, wrote in an op-ed for the Kyodo News last month. “The Games have already lost meaning and are being held just for the sake of them. We have been cornered into a situation where we cannot even stop now.

Koichi Nakano, a political science professor at Sophia University in Tokyo, put it like this to the Associated Press: “It’s a bit like a gambler who already has lost too much. Pulling out of it now will only confirm the huge losses made, but carrying on you can still cling to the hope of winning big and taking it all back.”

The International Olympic Committee retains sole authority to formally cancel the Games and has pushed forward undaunted after a year’s postponement, despite COVID-19 cases in Tokyo hitting six-month highs this week in a nation that is only about 20 percent fully vaccinated. And despite numerous polls indicating the majority of Japanese don’t support holding them.

Toyota, one of the IOC’s global corporate sponsors, withdrew a planned television ad campaign in Japan (but not in the United States) during the Games given their growing unpopularity here and confirmed its CEO will skip opening ceremony. Senior executives from several other Japanese sponsors will stay home Friday as well.