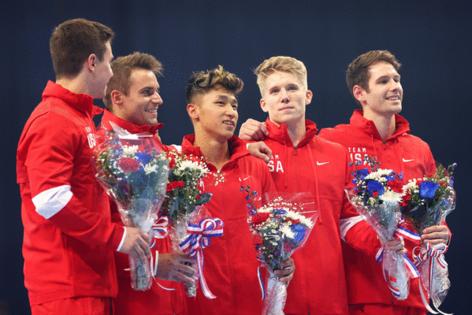 TOKYO — Brody Malone has made a name for himself the past few years as one of America's best male gymnasts. In April he won his second straight NCAA all-around title, and he followed that in June by winning the all-around titles at the U.S. championships and the Olympic trials with solid, skillful performances. Based on his progress and the high degree of difficulty in his horizontal bar routine, he has a good chance to reach the all-around final at the Tokyo Games and the best chance for an American man to win an individual medal.

Although gymnastics fans know who he is, Malone wasn't sure the professor of the online class he's taking this summer was aware of what he does and why he might be absent for a while. So Malone, a rising senior at Stanford who's majoring in management science and engineering, courteously sent his professor an email a few weeks ago to explain why he has been distracted lately.

"I told him, 'Hey, I'm in your class this quarter, I'm on the gymnastics team here at Stanford and I'll be gone, competing in the Olympics. I just wanted to let you know in case there were any kind of assignments or stuff that I may miss,'" Malone said in a telephone interview. "He was super nice in his response. I don't think he knew it."

The world will get to know Malone better starting here on Saturday, when the men's team qualifications take place at the Ariake Gymnastics Centre. Qualifying will determine the eight teams that advance to the team finals.

Scores don't carry over, but the top 24 performers in qualifying will advance to the all-around final, with a maximum of two gymnasts per national Olympic committee. Nikita Nagornyy of the Russian Olympic Committee, who did a historic triple back pike somersault on floor exercise at the European championships, is favored in the all-around and could also win gold in floor exercise and vault.

The top eight on each apparatus will qualify for the event finals, also with a maximum of two per NOC. That could help Malone: He had the fourth-best horizontal bar score in competition this year, according to thegymter.net website, and the top three scores were earned by Japanese men. The two-per-country rule would limit Japan's entries and perhaps leave room for Malone to earn a medal.

The U.S. men last won a team medal in 2008, a bronze. They were fifth at Rio in 2016 and fourth at the 2018 and 2019 world championships. Defending Olympic champion Japan is expected to contend for gold against China and Russian athletes competing as the Russian Olympic Committee.

"It's been challenging," Brett McClure, high performance director for men's gymnastics for USA Gymnastics, said during the Olympic trials. "Every Olympics has been a different scenario, whether it be the difficulty level is right there but the consistency wasn't [or vice versa]. We're going to have to align all the stars to match up the difficulty and execution with the rest of the world. I'm tired and I know these guys are tired of playing catchup."

"I definitely think we've got a shot at it," Malone said. "Anything can happen on any given day, especially in gymnastics. So definitely don't count us out of it. We've just got to go out there and do our gymnastics and let the scores fall where they do."

CHICAGO — When Stefanie Dolson considered what it will be like to be a member of the U.S. team in the first 3x3 basketball Olympic competition, she eventually expressed her excitement.

The New York Christ the King alumna was selected by her fellow Team USA athletes as a co-flag bearer for the Olympic opening ceremony in Tokyo, which will...Read More

The people of Japan don't want the Olympic Games, which are scheduled to start Friday in Tokyo after being postponed in 2020 by COVID-19. One poll said 80% are against it. Another said the opposition is 55%. Regardless, it...Read More

TOKYO — Vlatko Andonovski coached the women's national soccer team for 21 months and 24 games before experiencing what he experienced Wednesday.

And not just any loss, because the 3-0 defeat to Sweden in the ...Read More

The Olympics are going down under.

The 2032 Summer Games will be held in Brisbane, Australia, the International Olympics Committee announced Wednesday, two days before this year’s Opening Ceremony.