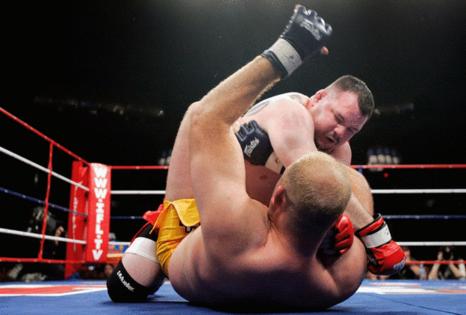 Travis Fulton, a mixed martial arts veteran nicknamed “The Ironman,” died by an alleged suicide at an Iowa jail over the weekend after recently agreeing to plead guilty to child pornography charges in federal court.

Fulton, 44, was found unresponsive in his cell at 3:58 a.m. Saturday by jail staff conducting a routine check, the Linn County Sheriff’s Office said.

It appeared the MMA fighter hanged himself, the department said.

Staff tried to revive Fulton with CPR and transported him to Mercy Medical Center, where he was pronounced dead at 5 a.m., officials said.

Fulton had been in state custody since Feb. 19 and was being housed as a “hold” for the U.S. Marshal’s Service.

On Friday, his defense lawyer informed the court Fulton planned to plead guilty to charges No. 2 and No. 4 form his indictment.

Charge No. 2 described an incident in November 2020 in which Fulton allegedly induced a female minor to “engage in sexually explicit conduct for the purpose of producing a visual depiction of such conduct” using a Canon Power Shot, the indictment said.

Charge No. 4 involved “knowingly” possessing child pornography depicting a prepubescent minor between June 2013 and November 2020, according to court paperwork.

In a prior filing, prosecutors said a mom reported in November 2020 that Fulton abused her 13-year-old daughter in his bedroom after giving her a ride in his semi-truck.

“(Fulton) allegedly persuaded the victim to engage in meditation and to remove her clothing down to her underwear,” prosecutors said.

The MMA fighter allegedly placed the minor “in a trance” and molested her, prosecutors claimed.

Attempts to reach the lawyer were not successful.

Fulton, 43, holds the MMA record for career professional fights with 320, according to ESPN, which said his Ironman nickname related to his long career stretching back to 1996.