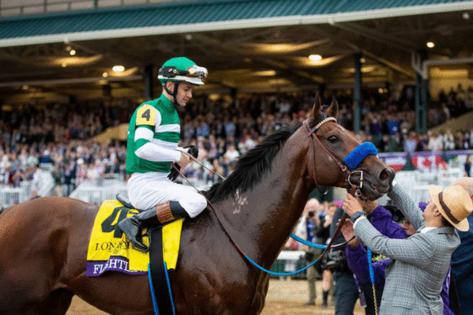 In the crazy business model of thoroughbred racing, a horse is more valuable not racing then they are on the track. So, with that in mind, the sport's latest superstar, Flightline, was retired on Sunday, one day after a dominating record-setting win the Breeders' Cup Classic at Keeneland Race Course.

It was expected that Flightline would never race again, but the speed with which it was announced by Lane's End Farm was almost as fast as the undefeated colt ran in his six races.

On Saturday, Kosta Hronis, the frontman for the ownership group, made it sound as if the discussion was yet to be had about the colt's future. But the Sunday morning announcement by the breeding farm indicated that the discussion was well under way.

"We'll all get together and discuss it at a later time and decide," Hronis said at the postrace news conference. "We'll always do what's best by the horse, I can promise you that. We'll … just decide together how we want to do this."

Terms of the syndication deal were not announced and it's expected that the principal owners will still have a large stake in the horse. Some had speculated that the horse's worth could approach $100 million.

The breeding season starts sometime in February. A horse's gestation period is about a year, and you want your horse born as close to the beginning of the year as possible but never in the previous year. Every horse has a racing birthday of Jan. 1. A horse born in December would be considered age 1 at the start of the year, even if they were only one month old.

Trainer John Sadler may have tipped the ownership's hand early Sunday morning when he spoke to the Breeders' Cup notes team.

"He is good this morning and he'll spend a few days here and have a showing at Lane's End," Sadler said.

No stud fee was announced. A horse can have up to about 150 matings a year, although that number fluctuates.

Flightline is not the only horse to retire to stallion duty after so few races. Justify, the second Triple Crown winner for trainer Bob Baffert, also retired after six races.

LEXINGTON, Ky. — Cody’s Wish was the prohibitive betting favorite, but an even stronger sentimental one on the second day of the 39th Breeders’ Cup World Championships at Keeneland. The son of Curlin fended off ...Read More