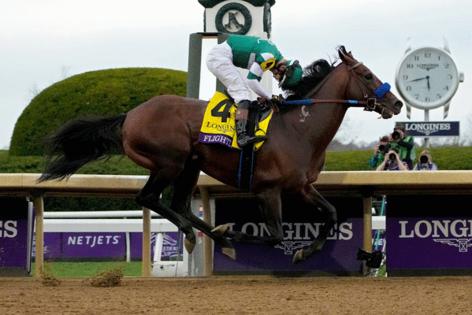 Did he cement his place his horse racing history with his 8 1/4-length win in the country's most prestigious race?

The almost 40,000 in attendance certainly thought so as they roared with approval and astonishment as he galloped down the stretch at Keeneland. His victory margin was the largest ever for a Classic winner and his odds of 2-5 were the lowest for any Classic winner.

The knock against Flightline, and in horse racing everything eventually gets knocked, is that it was only his sixth race and possibly his last. The sport doesn't celebrate its stars, it retires them.

Kosta Hronis, frontman for the ownership group, has not said if the horse will return to racing as a 5-year-old. His value as a stallion, while still unknown, could approach $100 million. That's what happens when a horse wins six races by a combined total of 71 lengths.

The race was not without its moment of serious concern when Epicenter was pulled up on the backstretch and vanned off. His condition was not immediately known. Epicenter is a 3-year-old and winner of the Travers Stakes. He finished second in the Kentucky Derby and Preakness.

Earlier in the day, Domestic Spending was pulled up entering the far turn in the turf Mile and vanned back to his barn where he was sent to nearby Rood and Riddle Equine Hospital for evaluation. Chad Brown tweeted that the horse suffered a "serious pelvic fracture" and was stable and under veterinary care.

The 1 1/4-mile Classic started with Life Is Good going for the lead and Flightline sitting on his outside. It didn't take long for the pair to separate themselves from the field. Down the backstretch, Life Is Good even opened up three lengths on Flightline. But on the far turn, Flightline made his move and pulled even at the top of the stretch. That's when he left Life Is Good in his rear-view mirror and effortlessly ran to the finish line.

Flightline paid $2.88 to win, $2.92 to place and $2.30 to show. Kentucky is the only state that pays off in penny breakage. Olympiad was second, followed by Taiba in third. Life Is Good faded to fifth behind Rich Strike.

It was easily the toughest field Flightline has faced. Life Is Good had won nine of 11 lifetime starts including four Grade 1s. Taiba won the Santa Anita Derby and Penn Derby. Olympiad had won seven of his last eight races, six of them graded stakes. Rich Strike was this year's longshot Kentucky Derby winner.

The feel good moment of the day came when Cody's Wish ($6.32) won the Dirt Mile. The horse is named for Cody Dorman, a Kentucky teenager with Wolf-Hirschhorn Syndrome, a rare genetic disorder. The wheelchair-bound 16-year-old was trackside and in the winner's circle with the horse.

Next year the Breeders' Cup will be held Nov. 3-4 at Santa Anita for a record 11th time. Will Flightline be defending his win in the Classic on his home track? Don't count on it.

LEXINGTON, Ky. — The Breeders’ Cup returns to Keeneland this weekend, with the World Championships of horse racing coming back to Lexington for the third time.