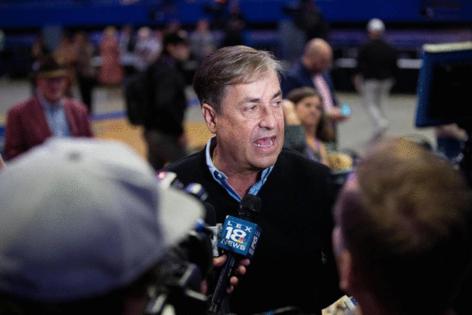 LEXINGTON, Ky. — From the first time John Sadler laid eyes on Flightline, he saw the potential for something truly special.

“I drove out to Lane’s End and looked at him and saw what a great looking horse he was,” the California-based trainer said this week at Keeneland. “He’s just one of those prospects you want to have in the barn and then hopefully they step up.”

Flightline has stepped up to a whole other level. The undefeated 4-year-old has won his five career races by an astounding 62 3/4 lengths. Fresh off a jaw-dropping 19 1/4-length win in the Pacific Classic, the son of Tapit is the 3-5 morning-line favorite for Saturday’s 5:40 p.m. $6 million Breeder’s Cup Classic at Keeneland.

The anticipation has placed the spotlight on the 66-year-old Sadler, who until Accelerate’s victory in the 2018 Breeders’ Cup Classic was 0-41 in the Breeders’ Cup races.

“We won one of these a few years ago at Churchill and it’d be great to win another one,” said the trainer who has over 2,700 victories and $141 million in earnings to his credit over a 44-year career.

Many have compared Flightline to 2015 Classic winner American Pharoah, even Secretariat. Breeder and co-owner Jane Lyon said she was approached at a sale by world famous trainer Aidan O’Brien, who gushed about Flightline’s magnificence.

“It’s funny, we all compete against each other every day but we’re together all the time, unlike say pro football teams where they compete against you but they’re in different cities,” said Terry Finley of West Point Thoroughbreds, which purchased Flightline as a yearling for $1 million and is part of an ownership group that includes Lyon’s Summer Wind Equine, Hronis Racing, Siena Farm and Woodford Racing. “To see people that I respect, to see the way they look at this horse and hear their comments, that’s very gratifying.”

“He’s never hid his talent,” Sadler said. “Nobody who’s been around him has been surprised by how good he is. He’s always shown great ability from day one.”

Yet Flightline did not make his official debut until April 24, 2021. At age 2, he backed into a stall latch, slicing his right hindquarters. Stitches were administered, leaving a zig-zag scar that’s still visible. Then a stained hock held him back a bit.

Knowing his unusual ability, how did Sadler resist pushing the horse?

LEXINGTON, Ky. — Todd Pletcher knows he has a tough task come Friday’s $2 million Breeders’ Cup Juvenile at Keeneland, but the Hall of Fame trainer is hoping for a home-track edge.

“Hopefully, if we have any sort ...Read More

A horse named Flightline might be the most dominant competitor currently in any sport. Of course, because it's horse racing, the average sports fan likely has no idea who he is and what his mark on sports history might be....Read More

LEXINGTON, Ky. — Bob Baffert is back. Or at least back at Keeneland, thus back at this year’s Breeders’ Cup. As irony would have it, the sport’s most famous American Thoroughbred trainer is making his return to the...Read More

LOS ANGELES — Flightline, whose brief two-year, six-race career drew comparisons to Secretariat, was given horse racing's highest annual honor on Thursday when he was given the Eclipse Award for Horse of the Year. He ...Read More