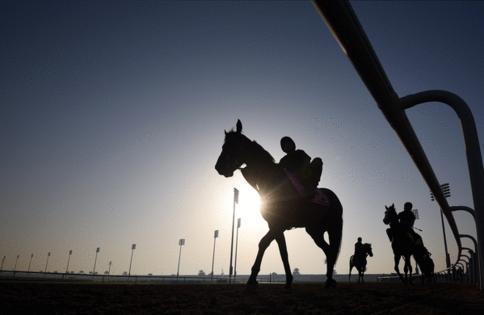 Mitchell has no blind spots when it comes to breeding talented Thoroughbreds. As the owner of Clarkland Farm in Kentucky, Mitchell and his late wife, Nancy, have bred successful racehorses for over 40 years.

One of the farm’s biggest success stories was somewhat unexpected. The colt was born in 2015 and later named Mendelssohn.

The colt was a late bloomer, and he had a good temperament, said farm manager Marty Buckner, the Mitchells’ daughter. As he grew, the colt impressed those who looked at him, too, and he was prepped for auction at the 2016 Keeneland September Yearling Sale, the most prestigious Thoroughbred auction in North America.

The word had gotten around, and Michael Vincent Magnier, son of Irish billionaire John Magnier who owns Coolmore Farm, outlasted all and purchased the colt for $3 million, the highest-priced yearling of the 2016 sale.

The weight of expectations rested firmly on Mendelssohn’s back, but he quickly delivered.

Mendelssohn won a slew of stakes races and earned a spot in the 2018 Kentucky Derby. He finished his career with just over $2.5 million in earnings and is now standing stud in Versailles, Kentucky, with a $35,000 fee. His first progeny began their racing careers this year.

Many might assume that most horses that top the Keeneland September Sale like Mendelssohn also go on to win prestigious races and have historic careers, but the truth is more complicated, and often the sale’s most expensive horses can also be the most disappointing.

For some, the reasons are statistical. For others, a big risk is deemed necessary to claim a significant reward.

In the crazy business model of thoroughbred racing, a horse is more valuable not racing then they are on the track. So, with that in mind, the sport's latest superstar, Flightline, was retired on Sunday, one day after a ...Read More

LEXINGTON, Ky. — Cody’s Wish was the prohibitive betting favorite, but an even stronger sentimental one on the second day of the 39th Breeders’ Cup World Championships at Keeneland. The son of Curlin fended off ...Read More