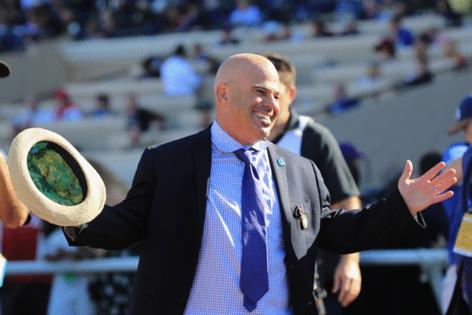 DEL MAR, Calif. — Walking outside of his barn at Del Mar racetrack, one of the most successful and controversial horse racing trainers in Southern California turned to an owner ambling alongside.

As a columnist neared, a mischievous grin punctuated a cheeky introduction: "He's here to do a hatchet job on me."

The voice did not belong to silver-haired lightning rod Bob Baffert. Or Richard Baltas. Or Jerry Hollendorfer.

The dusty shoes and wry ribbing belonged to Peter Miller, a man whose racing resume seems matched only by the emotions lining both sleeves and razor-sharp opinions he refuses to keep under lock and key.

Miller, who walked away from the sport in November before returning after six months, is back at Del Mar for the summer meeting's see-and-be-seen opener Friday.

The man with nearly $69.5 million in career earnings created whispers and finger-pointing by stepping aside after Del Mar's fall meeting. Many surmised he was avoiding potential punishment after a run of horse deaths, waving away smoke before it became full-blown fire.

Miller, who lives in Encinitas, is 45th in all-time earnings despite total starts that stand 76th. His win percentage ranks 33rd. He rose to international prominence when the same two horses won the same Breeders' Cup races in back-to-back years — Roy H in the Sprint, Stormy Liberal in the Turf Sprint, in 2017 and '18.

More big-stage cement was poured when Belvoir Bay picked up the Breeders' Cup Turf Sprint in 2019.

LOS ANGELES — The Breeders' Cup, horse racing's biggest event, has chosen Santa Anita to host its 40th anniversary event Nov. 3-4, 2023. It will be the 11th time the Arcadia track has been the host.

He considered getting up ...Read More

LOS ANGELES — Dr. Jeff Blea has had a lot of time to try to understand what has happened to him during the past year while taking his daily four- to six-mile walks around the Rose Bowl, listening mostly to Eric Church, ...Read More

Mitchell has no blind spots when it comes to breeding talented Thoroughbreds. As the owner of Clarkland Farm in Kentucky, ...Read More