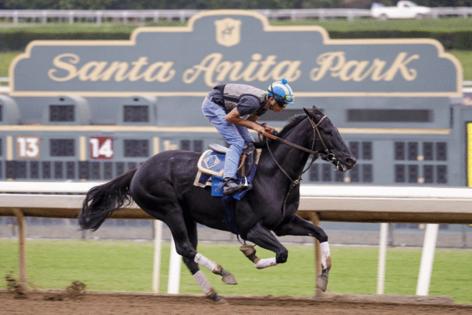 LOS ANGELES — The Breeders' Cup, horse racing's biggest event, has chosen Santa Anita to host its 40th anniversary event Nov. 3-4, 2023. It will be the 11th time the Arcadia track has been the host.

The announcement Thursday was not unexpected as the event has alternated between California and Kentucky the last few years. Del Mar last hosted it in 2021 with Santa Anita serving as host in 2019. This year's Breeders' Cup is at Keeneland in Lexington, Ky.

The two days of racing comprise 14 races, five on Friday and nine on Saturday, worth more than $31 million. The bulk of the money for purses comes from nominating fees. Generally, breeders nominate their stallions every breeding season for about the cost of their stud fee. Then the foal that results from the breeding is nominated in their first year for $400, which is good for the rest of their career.

Drew Fleming, president and chief executive of the Breeders' Cup, says there are currently no plans to change any of the races for next year.

"We're always looking to improve," Fleming said. "But right now we have no current plans to change the races."

With the event almost 16 months out, there is still plenty of time to make adjustments.

Santa Anita fans will be disappointed to learn that its 6½-furlong downhill turf course probably will not be used.

"Traditionally, outside of Santa Anita, the turf sprints are 5 or 5½ furlongs," Fleming said. "But Santa Anita has a new turf chute that can run at those distances. It's early and we're still looking at both."

A problem with using the 6½-furlong course is that there isn't a large distinction between it and the turf race at a mile (8 furlongs).

He considered getting up ...Read More

LOS ANGELES — Dr. Jeff Blea has had a lot of time to try to understand what has happened to him during the past year while taking his daily four- to six-mile walks around the Rose Bowl, listening mostly to Eric Church, ...Read More

Mitchell has no blind spots when it comes to breeding talented Thoroughbreds. As the owner of Clarkland Farm in Kentucky, ...Read More

DEL MAR, Calif. — The doubts have been removed. The questions have been answered. Flightline is the most dominating horse to come along in a very long time.

His latest tour de force was Saturday when he won the $1 ...Read More