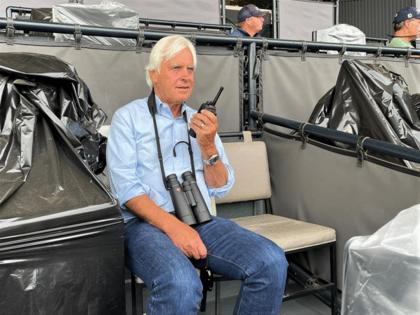 He considered getting up earlier but passed on the idea.

"I thought about getting there at 12:01 a.m. and go to the barn and start hammering the signs back up," he said with a laugh while sitting in box 227 in the Santa Anita grandstand watching his horses train for the first time after a three-month suspension following a positive medication test on Medina Spirit at last year's Kentucky Derby.

A handful of people were there to see the familiar head of white hair. Trainers John Sadler and Tim Yakteen were there as usual as was jockey Mike Smith and a revolving contingent of well-wishers. Yakteen even brought a box of donuts, which were sitting there when Baffert arrived around 6:30. Baffert's wife, Jill, came along for his first day back at work.

"It feels like the first day of school," Baffert said.

When he arrived at his barn, the first person he saw was his longtime assistant Jimmy Barnes.

"He came over and gave me a big ole hug," Baffert, 69, said. "He said, 'Thank goodness, you're back.' I haven't talked to Jimmy since I left. Our whole barn is like a family, I've known them all for so long."

Depending on who you talk to, Baffert is either beloved or reviled, with more in the former than latter category. He has been a particular target of animal rights activists with PETA calling for his removal from the Hall of Fame. It's because of his celebrity that he is a particularly valuable target. He is the one name non-racing people know.

It will take a few days for the Baffert barn to return to normal. When he was handed a 90-day suspension by the Kentucky Horse Racing Commission, which is honored in all states, the signage on his barn had to come down, plus his office had to be cleaned out of personal items.

"There was supposed to be no sign of Bob Baffert," the trainer said.

LEXINGTON, Ky. — It’s all up to Bob Baffert now.

The 90-day suspension levied against horse racing’s most famous trainer by the Kentucky Horse Racing Commission and reciprocated by tracks around the country, ...Read More

In somewhat of a small victory, trainer Bob Baffert had his proposed two-year ban from racing in New York reduced to one year by a three-person panel appointed by the New York Racing Association. Baffert can resume racing ...Read More

MINNEAPOLIS — Of all his trips to the winner's circle, Harry Hernandez takes special pride in the ones that no one saw coming. That philosophy came in handy last fall, when the young jockey met his new agent, former ...Read More

LOS ANGELES — In early May, Corey Martinez, who is in charge of Santa Anita’s video surveillance, was going through video of the stalls of horses entered to race on May 8, just double-checking whether the last ...Read More

Here was a Des ...Read More

LEXINGTON, Ky. — Texas is, well, Texas, a state with a strong independent streak. Unfortunately, that streak may be working to the detriment of horse racing in the Lone Star State.