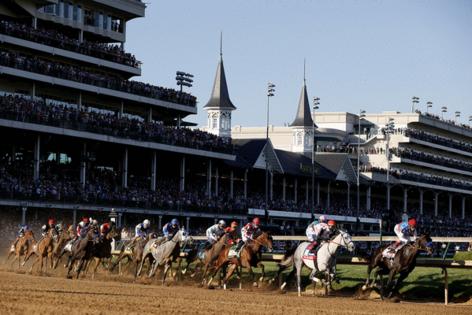 That’s all we’ve heard for the last decade or two, much less years. All those horrible equine fatalities at Santa Anita a couple of years back. All those Bob Baffert drug positives in all those high-profile races. All those PETA protests against a sport thought to be well past its prime, one on a slow, agonizing path to extinction.

Don’t tell that to the bettors.

Don’t tell that to the 15,874 who turned out for opening day at Del Mar last week, leading to a record handle of $21,339,643. The California seaside track’s weekend handle: A cool $80.5 million, a 17 percent increase over 2019, the last time fans were allowed to visit the beautiful venue.

Don’t tell that to the 20,983 who showed up at Monmouth Park for last Saturday’s Haskell Invitational, which helped produce a $16.4 million handle. And that was without a Kentucky Derby winner in the field because, well, at this point, we don’t really have an official Kentucky Derby winner.

By now we’ve heard the horse-racing-is-dead narrative so long it has almost been taken for granted. The popular storyline persists that there just isn’t much interest in Thoroughbred racing beyond the passionate subset that clings to the sport.

Yet, people keep showing up to the races. More importantly, the bettors keep showing up. Even in a time when betting on any type of sport has become legal in venues beyond Las Vegas, gamblers apparently still find value in laying down a dollar or two on the ponies.

Yes, the 2021 increases are helped by the limited or no-attendance policies of 2020 resulting from the coronavirus pandemic. Still, the money wagered has been consistently strong, especially at the sport’s stronger tracks.

At Henderson’s Ellis Park, which has been hurt by the unusually rainy weather in July, General Manger Jeffery Inman reports, “Our out-of-state handle is down from 2020, but our on-track numbers are double last year’s. Overall we’re double digits over prior year.”

Why the staying power in the face of so much bad press? Fox Sports has helped. Along with Fox Sports 1, the network has broadcast a ton of racing over the last two years, filling those Saturday and Sunday programming slots with races from all across the country. Surely that kind of exposure has to be of benefit.

Also, these tracks put the sport’s best foot forward. I remember a few years ago, talking to D. Wayne Lukas at Pimlico before the Preakness. Always full of ideas, Lukas said racing needed to follow the example of the successful tracks like Saratoga, Del Mar and Keeneland. The sport needed to be more customer-oriented and family-friendly, appealing to both the gambler and those who just want to enjoy a day at an iconic setting with good food, atmosphere and fun. To the average horse racing fan, going to the races is a social event.

Plus, to be honest, Americans love to gamble. From lotteries, to casinos, to scratch-offs, to online sports wagering sites, gambling continues to grow. According to Forbes, the sports betting market generated $1 billion in revenue in 2020, with that number expected to grow six times by 2023. Instead of being squeezed out of the market, racing is holding its own.

To be sure, the sport still has its fair share of problems. And we’ll never turn the clock back to the 1930s, ‘40s and ‘50s when horse racing was America’s pastime. We’re in a different era where people have a variety of different tastes, interests and ways to spend their entertainment dollar.

But it’s crazy to think horse racing doesn’t have a place on that lucrative landscape. Judging by the business numbers, its demise has been overstated. The bettors back that up.

DEL MAR, Calif. — No, jockey Flavien Prat's weekend is not an audition for the television show "The Amazing Race."

A 29-year-old jockey died Wednesday after being thrown from his horse.

Eduardo Gutierrez-Sosa was riding 2-year-old Godfather Advice at a race in central Oregon when he was thrown over the rail, local NBC affiliate KTVZ ...Read More

Trainer Bob Baffert scored his first legal victory in the wake of the positive medication test of Kentucky Derby winner Medina Spirit on Wednesday when a New York federal judge said it was unconstitutional for the New York...Read More

There is no such thing as a sure thing in horse racing.

Any handicapper or person involved in the sport can tell you that. And it’s why what jockey Alex Cruz is doing day in and day out at Emerald Downs is so impressive...Read More

In the 1991 movie “What about Bob?” title character Bill Murray drives his new psychiatrist batty while relentlessly unpacking his tangled thoughts, phobias and home-spun truths.

A gem from the latter: “There are ...Read More

LEXINGTON, Ky. — The prep race schedule for the 2022 Kentucky Derby will have a different look.

Officials at Oaklawn Park announced Tuesday that the Grade 1 Arkansas Derby will be run April 2, 2022, five weeks before ...Read More