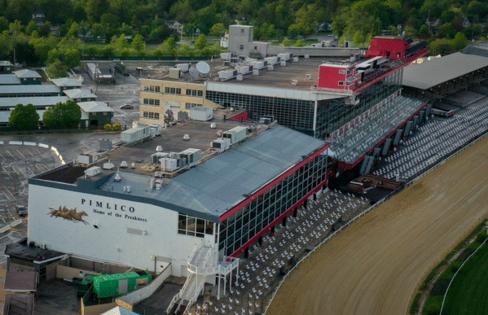 BALTIMORE — As the world returns, haltingly, to familiar rituals, the 146th Preakness Stakes will do the same.

With the crowd at Pimlico Race Course limited to 10,000 and no raucous infield party, this will not be the Preakness we grew up with, but it will be a step in that direction, with a familiar May date, some patrons in the stands and a Triple Crown bid hanging in the balance.

If television ratings and betting totals from the Kentucky Derby are any indication, racing fans were eager to have the Triple Crown back in its familiar place on the calendar. Medina Spirit added to that excitement with his surprise wire-to-wire victory for trainer Bob Baffert.

In the Preakness, this “tough little horse,” as Baffert calls him, will face the usual blend of Derby rematches and fresh challengers. As we weigh Medina Spirit’s chances at taking the second leg of a potential Triple Crown, here are five stories to watch:

Can Medina Spirit stay ahead of that clock ticking toward midnight?

Baffert wasted little time invoking Cinderella as he described his own surprise with Medina Spirit’s performance in the Derby. He admired the colt’s grit and consistency, but a runner-up finish in the Santa Anita Derby left him wondering if Medina Spirit faced an insurmountable talent deficit against the best in this year’s 3-year-old class. Baffert had already pulled two more hyped contenders, Life is Good and Concert Tour, off the Derby trail, and some skeptics viewed his lone remaining entry as the runt of the litter.

Well, that runt refused to be passed after jockey John Velazquez let him run to the lead at Churchill Downs. Mandaloun, Hot Rod Charlie and Essential Quality took their shots, but he would not yield.

We know Medina Spirit is a good bet to give his best again at Pimlico Race Course. The former $1,000 yearling has run five times this year and has not finished worse than second. Baffert-trained horses have tended to hold their form from Derby to Preakness; of his previous six Derby champions, five won at Pimlico and the other finished second.

That said, the pace scenario will be fascinating. Can Velazquez again control the race from the lead? Medina Spirit didn’t have it easy in the Derby; Mandaloun ran with him the whole way. But no one pushed him to run uncomfortable fractions early, perhaps because no one viewed him as the greatest threat in the field. That will not be the case in the Preakness, where he’ll be an obvious target.

With so many Derby runners skipping the race, is this a weak field?

BALTIMORE — Yolanda Jiggetts will head to the Pimlico Race Course on May 15 for the Preakness race, but with an eye toward a future when crowds flock there more than once a year and for a range of events.

BALTIMORE — The field for the May 15 Preakness Stakes lost a significant contender Thursday when trainer Brad Cox announced Kentucky Derby runner-up Mandaloun will not run in the second leg of the Triple Crown.

Gail Rice had a goal.

And with that, the 59-year-old self-described “backyard breeder” from Ocala, Fla., let out ...Read More

Kentucky Derby favorite and fourth-place finisher Essential Quality will not run in the May 15 Preakness Stakes, but Derby champion Medina Spirit will face a challenge from talented stablemate Concert Tour as he tries to ...Read More

Kentucky Derby champion Medina Spirit could face significant competition from challengers familiar and fresh as he tries to follow up his surprise victory with a similar performance in the May 15 Preakness Stakes.

LOUISVILLE, Ky. — So how was your Saturday?

It didn’t beat Bob Baffert’s Saturday. With the possible exception of a national lottery winner, no one on planet Earth had a better Saturday than Bob Baffert.