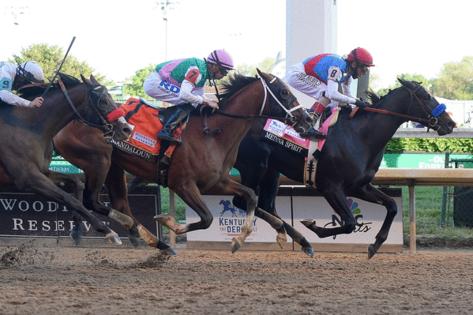 BALTIMORE — The field for the May 15 Preakness Stakes lost a significant contender Thursday when trainer Brad Cox announced Kentucky Derby runner-up Mandaloun will not run in the second leg of the Triple Crown.

Cox said he’ll instead focus on preparing Mandaloun for Grade 1 stakes later in the year. On the same National Thoroughbred Racing Association conference call, he announced Caddo River will not be ready for the Preakness after he was scratched from the Derby field because of an infection.

With Mandaloun out, the Preakness will not feature any of the three contenders who pushed Medina Spirit late in the Derby. Third-place finisher Hot Rod Charlie and fourth-place finisher Essential Quality were already ruled out, with potential runs in the Belmont Stakes on their respective agendas.

Earlier on the NTRA conference call, Medina Spirit’s trainer, Bob Baffert, said the Derby champion is doing well ahead of his planned van trip to Baltimore on Monday or Tuesday. Meanwhile, Baffert plans to breeze Concert Tour at Churchill Downs this weekend before the making the final call to enter him in the Preakness.

Gail Rice had a goal.

And with that, the 59-year-old self-described “backyard breeder” from Ocala, Fla., let out ...Read More

Kentucky Derby favorite and fourth-place finisher Essential Quality will not run in the May 15 Preakness Stakes, but Derby champion Medina Spirit will face a challenge from talented stablemate Concert Tour as he tries to ...Read More

Kentucky Derby champion Medina Spirit could face significant competition from challengers familiar and fresh as he tries to follow up his surprise victory with a similar performance in the May 15 Preakness Stakes.

LOUISVILLE, Ky. — So how was your Saturday?

It didn’t beat Bob Baffert’s Saturday. With the possible exception of a national lottery winner, no one on planet Earth had a better Saturday than Bob Baffert.

The six-time Kentucky Derby-winning trainer started the 2021 prep season with a loaded stable of top contenders. Yet he came to Louisville with just one starter, Medina...Read More

“King Fury spiked a 104-degree fever this afternoon after he galloped this morning,�...Read More