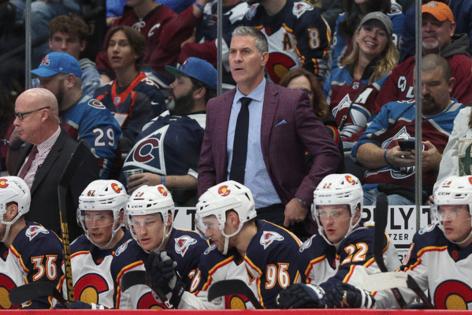 DENVER — Seven years can take a toll on a relationship, but the spark is still there between Nathan MacKinnon and Jared Bednar.

“If he was painful or annoying, who knows?” MacKinnon said Tuesday morning. “But it’s easy. He actually will talk with you about other things besides the neutral zone forecheck.”

MacKinnon reached a milestone Tuesday to help Bednar reach his. The prolific Avalanche center’s 700th career point gave Colorado the first goal in Bednar’s 500th game as an NHL coach, which also turned out to be the night he passed Michel Bergeron as the franchise’s winningest coach. No. 266 was a 3-2 barn burner over the Capitals at Ball Arena.

Alexandar Georgiev made 36 saves to shepherd Colorado to a sixth consecutive win despite being outshot by 12. With Minnesota’s coinciding loss, the Avs (26-17-3) catapulted out of the wild card and into third place in the Central, stationing themselves in a divisional playoff spot for the first time this calendar year.

Artturi Lehkonen, Andrew Cogliano and Alex Newhook scored the goals. MacKinnon became the first player of the 2013 NHL draft class to reach 700 points. Nobody else from that class has 600.

He reached the landmark in typical relentless fashion. As Washington’s Dmitry Orlov attempted to take out MacKinnon during a 2-on-1, he absorbed the heavy contact, extended his stick and tapped the puck to Lehkonen for a clean finish. It was Lehkonen’s sixth goal in the last six games and 14th of the season.

Washington twice closed the deficit to one goal. The first time, Newhook answered with one of the most skilled individual plays of his burgeoning career, a true first-round pick’s goal. He turned on the jets entering the offensive zone for a brief display of MacKinnon-esque speed, while navigating the puck to his left-hand side for a far-post finish.

Newhook has four goals and six points in the last six games — his hottest stretch of the season.

Youth was met with vast experience in the third period. Alex Ovechkin, a game-time decision after missing Washington’s last game, was fed the puck in his office at the faceoff circle. It was mano-a-mano with Georgiev, who knew the shot was coming but still couldn’t stop the 37-year-old’s patented power. Ovechkin and Newhook have now combined for 835 career goals (811 of which belong to Ovechkin).

Georgiev has faced 22 of Ovechkin’s shots in his career. He has allowed nine goals to the “Great 8” — a stat that was on his mind after he blanked the Capitals in Washington earlier this season. This time, Ovechkin got the better of him, but Georgiev got the last laugh. His magnificent third period stabilized the Avs as Washington sustained zone time.

Georgiev’s counterpart, former Avalanche goalie Darcy Kuemper, vacated the bench for the last two minutes. Georgiev used his noggin to make arguably his best save of the season with 1:14 left, lunging across the crease and deflecting a Filip Gustavsson shot out of play with his head.

TAMPA, Fla. — When the Lightning last played the Wild three weeks ago, they were the victims of a few bad bounces that wound up in their net, resulting in a four-goal loss in Minnesota.

PHILADELPHIA — For the first time since Dec. 22-23, the Flyers have lost two games in a row, following up Sunday’s 5-3 loss to the Winnipeg Jets with a 4-3 overtime loss to the Los Angeles Kings on Tuesday.

The Devils overcame a 2-1 deficit to start the third period to ...Read More