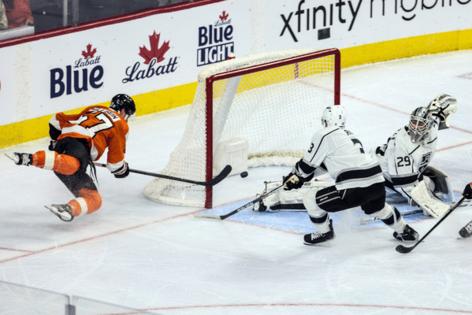 PHILADELPHIA — For the first time since Dec. 22-23, the Flyers have lost two games in a row, following up Sunday’s 5-3 loss to the Winnipeg Jets with a 4-3 overtime loss to the Los Angeles Kings on Tuesday.

The Flyers played with the lead three times and never trailed through three periods. The first time they fell behind, it was the deciding goal in overtime from Kings forward Kevin Fiala.

After Owen Tippett used his size and speed to generate a two-on-one, James van Riemsdyk scored to give the Flyers the lead just 5:50 into the game. They played with the lead for under four minutes before two minutes of scoring reset the game.

The Flyers' first penalty of the game resulted in an Anže Kopitar power-play goal scored four seconds after the faceoff. A minute later, Wade Allison restored the Flyers’ lead when he finished on his own rebound of his shot off the rush. A minute after that, Kopitar tied it back up after Adrian Kempe’s wraparound pass found him in the slot with goalie Carter Hart overcommitted to the opposite side of the net.

Rasmus Ristolainen added another goal at 10:37 of the second period to give the Flyers a 3-2 lead, but the Kings equalized again with a Samuel Fagemo goal late in the middle frame. A scoreless third period sent it into overtime for the first time since Dec. 29 in Anaheim.

Coach John Tortorella has said his lines don’t have a pecking order. Morgan Frost’s line with van Riemsdyk and Tippett has started many games and played against opposing top lines. Noah Cates’ line with Joel Farabee and Travis Konecny has also played a first-line role — and it features the team’s top scorer in Konecny (49 points). Tuesday, they both generated momentum and opportunities.

While Scott Laughton’s line with Allison and Kevin Hayes hasn’t played a first-line role, it features veteran second-line center Hayes. Since it typically goes against other third lines, Hayes has been able to take advantage and is scoring at a career-best rate (.92 points per game). Against the Kings, all of the players on the third line created as much offense as the other top lines. Between the three of them, they compiled eight shots on goal, one goal (Allison), and one assist (Hayes).

The Flyers started the second period with 14 seconds remaining on their first-period power play. It expired without event, and a minute later, the momentum flipped the other way.

The Devils overcame a 2-1 deficit to start the third period to ...Read More

PITTSBURGH — Kris Letang’s reintroduction to the lineup was just the spark the Penguins needed as they operated without a key defensive cog on a night where defense was at a deficit.

The defenseman had the game-...Read More

The Coyotes won for only the second time in their last 13 games. The ...Read More