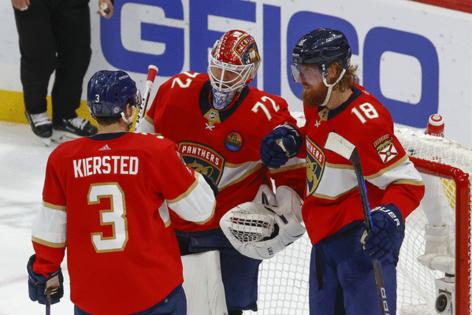 SUNRISE, Fla. — The Florida Panthers returned home and got Aleksander Barkov back from a weeks-long battle with an illness Thursday, but it was one of the least heralded Panthers who powered Florida to an impressive 5-1 rout of the Detroit Red Wings in Sunrise.

Chris Tierney, playing in only his second game since getting called up from AHL Charlotte on Monday, broke the ice with his first goal as a Panther in the first period and Florida never trailed to start another important stretch with a win against a quality opponent.

Tierney got free for a breakaway on a line change by the Red Wings and fired a backhanded shot past Detroit goaltender Alex Nedeljkovic with 1:55 left in the first to put the Panthers up 1-0 and Florida finished the opening period with a massive 15-5 advantage in shots on goal.

The Panthers ultimately outshot Detroit, 41-21. The production of a fourth-line forward was a bit of a throwback to last season, but Florida’s win was about much more than just the newcomer’s contribution.

Barkov, in his return from a six-game absence, helped put the Panthers up 2-0 when forward Eetu Luostarinen redirected the captain’s shot from the top of the slot. Defenseman Matt Kiersted, who also got called up Monday, stretched the Florida’s lead to 4-1 when he boxed out a defender on the crease and pushed a shot by Nedeljkovic. All-Star right wing Matthew Tkachuk notched his 13th multi-point game of the season and spurred the blowout when he dangled his way to a filthy goal for a 5-1 lead in the second period.

It was one of the Panthers’ most complete wins of the season, much to the delight of the crowd inside FLA Live Arena, and it came in the first of five straight games in Florida.

The Panthers will play the Tampa Bay Lightning in Tampa on Saturday before coming back to South Florida for a three-game homestand and the Panthers, who haven’t had a winning record since before Thanksgiving, have a prime opportunity to finally start stringing together some victories.

More performances like this one will help. Although Florida didn’t score for more than 18 minutes, the Panthers’ win was never in real doubt because of how thoroughly they controlled the possession and dominated Detroit in scoring chances.

At the same time, Florida has lost plenty of those type of games this year. The difference Thursday was the skill they added to their identity, too.

It was most evident on Tkachuk’s goal. The star forward barreled down the right side of the net for a 2-on-2 chance and, instead of forcing a pass and settling for havoc at the net, he deked to his left, swung the puck back into the slot and fired a top-shelf shot past Nedeljkovic for a four-goal lead.

With 15 high-danger chances in the first two periods, the Panthers were on pace for their second most of the season before easing up in the third and finishing with 16.

The only blemishes for Florida came on special teams. The Red Wings scored their only goal on a power play in the second period and the Panthers went 0 for 3, but even then they fired eight shots and racked up five scoring chances on the first two before a garbage-time power play in the final minutes.

For at least one day, Florida was back to its old self.