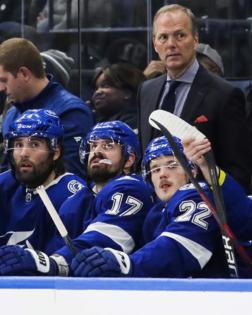 TAMPA, Fla. — After a sluggish start in their last game against Detroit, the Lightning came out Thursday night focused on establishing themselves early against the Predators.

Their opening was much better, scoring two goals inside the game’s first three minutes. But they allowed the Predators back into the game before pulling out another win late.

Brayden Point scored two goals, including the eventual game-winner 2:14 into the third period, to give the Lightning a 5-2 home win. The Lightning have now won four straight against the Predators and 10 of their last 12 meetings with Nashville.

Point — who has three goals in two games and 13 on the season, trailing Steven Stamkos’ lead by one — put the Lightning ahead leading a 2-on-1 rush, wristing a shot from near the left dot shortside just above Nashville goaltender Juuse Saros’ right pad.

The Lightning played a more complete game than they did in their loss to the Red Wings on Tuesday night. They established zone time, created offense by drawing traffic to the front of the net, but did most of their damage in open ice.

Point scored both of his goals with space, utilizing his speed to find open looks.

After Point took a stretch pass from Ian Cole through the neutral zone, he hit an extra gear and parted two flatfooted Nashville skaters, swept in front of the front of the net and buried a shot just inside the right post past Saros’ left skate, giving the Lightning a lead just 76 seconds into the game.

The Lightning then struck on the power play as Corey Perry, playing in the bumper spot on the first-team unit for the first time this season, wristed in a rebound off Stamkos’ initial shot, and just like that the Lightning had a 2-0 lead with just 2:53 elapsed.

The Lightning allowed their league-high seventh short-handed goal of the season on Mark Jankowski’s shot with 9:09 left in the first. And Nashville evened the game at 2 when Alexandre Carrier charged the left post after his shot from above the left circle and buried his rebound on the blocker side with 7:24 left in the second.

After Point’s go-ahead goal, Nick Paul provided a two-goal cushion, launching a shot from above the right circle, top shelf past Saros far side 7:10 into the third. Brandon Hagel made it 5-2 with 4:20 left on the Lightning’s first short-handed goal of the season.

Former Lightning defenseman Ryan McDonagh, traded to Nashville in the offseason for cap relief, couldn’t play in his return after taking a puck to the face Saturday, but received a standing ovation and stick taps along the Lightning bench when he was recognized from a suite. He also received a proclamation from Tampa mayor Jane Castor.

With two assists, Stamkos extended his point streak to 12 games, making him the third Lightning player with two point streaks of 12 or more games. Nikita Kucherov and Marty St. Louis also accomplished that feat. Stamkos also has points in 12 straight games against Nashville.