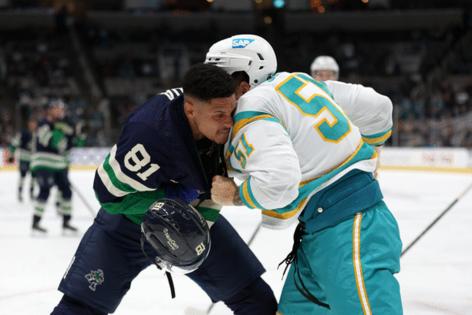 Quinn’s move no doubt provided a bit of a spark but didn’t result in a Sharks win.

Vancouver Canucks forward Elias Pettersson scored with 34.7 seconds left in overtime to hand the Sharks a 6-5 loss before an announced crowd of 11,492 at SAP Center.

Jonah Gadjovich scored an unassisted goal 2:45 into the third period to tie the game, and Kevin Labanc scored with 8:32 left in regulation time as the Sharks came from behind to take a 5-4 lead.

Makiniemi and the Sharks allowed a power play goal to Andrei Kuzmenko with 3:53 left in the third period.

Nick Bonino, Timo Meier, and Logan Couture also scored, and Makiniemi, in his NHL debut made seven saves in the third period as the Sharks had their losing streak extended to four games.

Tomas Hertl had two assists, including one on Labanc’s go-ahead goal as the Sharks fell to 2-8-5 at home this season.

Acquired by the Sharks from the Carolina Hurricanes on July 13 as part of the Brent Burns trade, Makiniemi, in 12 games with the Barracuda, had a 6-4-1 record and a .918 save percentage that ranked ninth among all qualified AHL goalies.

With James Reimer still injured and unavailable, the Finnish-born Makiniemi was recalled by the Sharks on Tuesday and backed up countryman Kahkonen on Wednesday. It was the first time Makiniemi, who replaced Aaron Dell as the Sharks’ backup goalie, had been on an NHL roster.

Kahkonen made a handful of solid saves Wednesday night but once again struggled with his consistency, as he allowed four goals on 19 shots in the first two periods. Kahkonen entered the game with the Canucks with a 3-6-2 record and a .882 save percentage in 11 games this season.

Midway through the second period, it looked like the Sharks had received the game-changing break they needed.

A would-be goal by Canucks forward Dakota Joshua at the 8:02 mark of the second period was nullified after the Sharks successfully challenged the play for goaltender interference. Less than three minutes later, Sharks captain Couture scored a game-tying goal on a shorthanded breakaway.