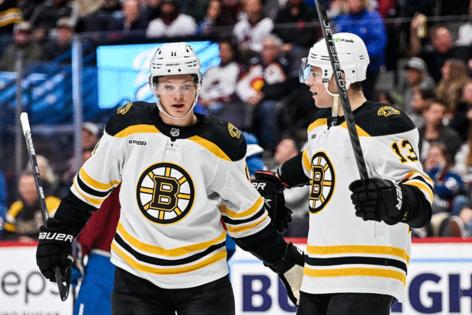 The lineup that the Colorado Avalanche iced on Wednesday at Ball Arena will never be confused with the team that the captured the Stanley Cup last spring. But the Bruins can only beat the team that’s in front of them, and that’s what they did, grinding down a game but over-matched Avs team of call-ups and taking a 4-0 victory to kick off their three-game road trip.

Taylor Hall scored two goals and added an assist to help the B’s secure the two points that were just sitting there for them. Linus Ullmark (23 saves) improved to 15-1 on the season with his second shutout of the season.

After losing in a shootout to Vegas on Sunday, the B’s improved to 21-3-1 and, as we inch toward Christmas, they have still have yet to lose two games in a row.

The Avalanche had a veritable who’s who of their star players on the shelf for the – Nathan MacKinnon, Gabriel Landeskog, Valeri Nichushkin, Josh Manson and Artturi Lehkonen, to name just a few.

But Colorado was able to keep it even through the first 20 minutes in a low-event first period. The B’s had the better chances, but Alexander Georgiev made some very good stops (15 in all) to keep it at 0-0.

The B’s did finally forge ahead at 4:49 of the second, but not before the temperature rose a bit. Dryden Hunt leveled David Pastrnak with a open-ice hit in the neutral zone. It was a clean hit but, considering the recipient, Tomas Nosek deemed it was worth some kind of response. He went after Hunt, receiving an extra two minutes and a couple of shots to the face for his efforts.

But after the B’s killed off the Nosek minor, Pastrnak gave an answer of his own to the hit. From behind the net, David Krejci fed Pastrnak on the right circle and he blasted his 18th goal past Georgiev on a one-timer.

The B’s doubled their lead at 9:50 on a pretty, opportunistic play. Charlie Coyle caused a turnover just inside the the Colorado blue line with the puck going to Trent Frederic, who gave it right back to Coyle moving down the right wing. Coyle made a terrific move around the Colorado defender and sent a perfect pass to Taylor Hall at the top of the crease for his 10th of the season.

The third line nearly made it 3-0 when Coyle set up Frederic, but he whistled his one-timer off the cross-bar.

The B’s had to kill off a Nick Foligno high-stick later in the period, which they did and took the 2-0 lead into the third.

In the third, Frederic kept that one-timer at the ready and notched his sixth of the season, ripping a Hall feed past Georgiev from the high slot at 6:24.

If there was any doubt left, Hall removed it by scoring his 11th on a breakaway goal at 9:42 after Jake DeBrusk sprung him.