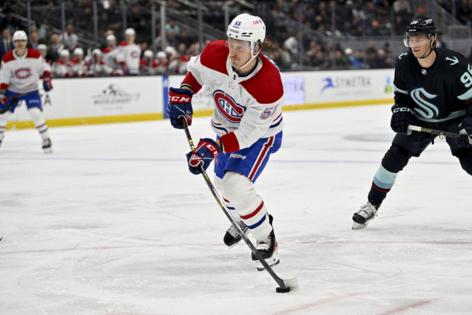 But after Wright scored his first career NHL goal late in Tuesday night’s opening period, the Kraken had one of those momentary lapses early in the second they’d managed to avoid of late in close games. This time, though, it proved lethal as goals by Cole Caufield and Josh Anderson just seven seconds apart sent the Kraken reeling toward a 4-2 loss to the Montreal Canadiens.

The Kraken, who fell to 15-7-3 with their second straight home defeat ahead of a four-city East Coast road trip, had been plagued by such letdowns in the season’s opening month in losses to teams they’d mostly outplayed. But they’d gone 12-2-1 in their last 15 games largely by shedding that habit and seemed to be outplaying a surprising .500 Montreal team long on heart and youthful talent but short on the elite experience and goaltending usually needed to be a true playoff contender.

Jared McCann got the Kraken back within two goals by redirecting a pass out front with just under one second remaining in the second period. But the Kraken, down 4-2 entering the third, could not complete the comeback from there.

Montreal had managed to blow a game 7-6 in overtime Monday night in Vancouver in which they’d carried a 4-0 lead deep into the second period. But they tightened up considerably this time and got some better netminding by Allen, who stopped Yanni Gourde on a breakaway in the opening minute of the third with the Kraken desperately hoping to close the gap.

Montreal had opened the scoring 12:56 into the contest on a strange goal off a puck shot toward the net from the left point by Jonathan Kovacvic that somehow found its way past Jones. But the Kraken, especially Wright, had been pressing toward the Canadiens’ net before that, with only Allen standing between them and at least a couple of goals.

They kept on coming and Wright finally found the back of the net at the 15:30 mark by one-timing a pass out front from Oliver Bjorkstrand. The first NHL goal for Wright, in his eighth game, came against a Canadiens team that bypassed him with their first overall pick in last summer’s draft – leading to him tumbling two more spots to the Kraken at No. 4.

The player the Canadiens selected instead, winger Juraj Slafkovsky, was out there playing in this one but was mostly a non-factor.

Wright’s goal seemed to give the Kraken momentum heading to the first intermission, but that quickly vanished just two minutes into the second when Andre Burakovsky attempted an own-zone clearance pass from the corner that Nick Suzuki intercepted. Suzuki quickly fed second-year star Caufield for a one-timer and his team-leading 15th goal of the season.

If that wasn’t bad enough, the Kraken yielded an odd-man rush off the ensuing faceoff and it took Cristian Dvorak and Anderson just seven seconds to combine for an additional goal and a 3-1 lead for the visitors.

The Kraken didn’t give up much more the rest of the frame but then a poor line change led to a 3-on-2 rush by Montreal with Rem Pitlick taking the final pass and one-timing it by Jones for a 4-1 lead with 1:20 to go in the middle frame.

Montreal wouldn’t manage another shot until nine minutes into the third period.

The Kraken, meanwhile, got back within a pair as the second period ticked down off some strong work in the corners. Burakovsky finally dug the puck loose and sent it to McCann for his team-high 12th goal of the season.

But the Kraken couldn’t get any closer.