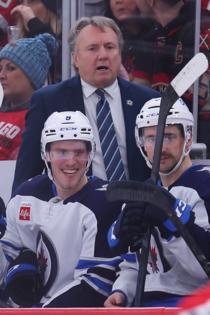 It wasn’t necessarily all bad for the Panthers on their five-game, nine-day trip through the Western Conference, but it was certainly trying and it ended with another ugly 5-2 loss to the Winnipeg Jets on Tuesday in Canada.

Florida finishes the trip with two wins, an overtime defeat and two lopsided losses, plus a pair of concussed players, a goaltender benched and Aleksander Barkov still out with an illness.

The Panthers (12-10-4) now return to South Florida still with a sub-.500 record and sitting outside the postseason picture. A pair of positive moments over the weekend — blowout wins against the lowly Vancouver Canucks and unlikely powerhouse Seattle Kraken — were quickly washed away with a lifeless performance in Manitoba.

Florida fell behind 1-0 in the first 14 minutes, then let the Jets (16-7-1) retake the lead just 17 seconds after the Panthers got their equalizer later in the first period. Winnipeg added another just 1:43 into the second period and the Panthers yanked goaltender Spencer Knight, who helped carry them to their two wins over the weekend.

It didn’t lead to a spark. The Jets scored again on star goaltender Sergei Bobrovsky with 6:37 left in the second period and Florida once again couldn’t muster a comeback at the Canadian Life Centre in Winnipeg.

This one was always going to be challenging for the Panthers. Barkov missed his sixth straight game with an illness, leaving Florida without its star center and captain, and center Anton Lundell, right wing Patric Hornqvist and defenseman Radko Gudas all sat out, too.

Lundell is dealing with an illness, and Hornqvist and Gudas both have concussions.

Those four — fixtures in the lineup — were replaced by centers Aleksi Heponiemi, Zac Dalpe and Christ Tierney, and defenseman Matt Kiersted, with Hornqvist going on long-term injured reserve to open up some badly needed cap space.

It meant the Panthers didn’t have to play shorthanded as they sometimes have this year, but their trademark depth was sapped and Florida fielded a line’s worth of players who will spend the vast majority of this season in the American Hockey League.

Those newcomers did, however, give the Panthers some life in the third period when Dalpe scored off assists Tierney and Kiersted to cut the Jets’ lead to 4-2 with 10:58 to go.

Ultimately, it was just one positive moment, though. Although Florida finished with a 41-32 edge in shots, Heponiemi, Tierney, Dalpe and Kiersted were all overmatched, relative to their teammates.

Right now, the Panthers aren’t good enough to survive anything less than an excellent all-around performance and they were far from perfect at the end of their trip.

With more than a quarter of the season done, Florida still has yet to win three in a row this year.