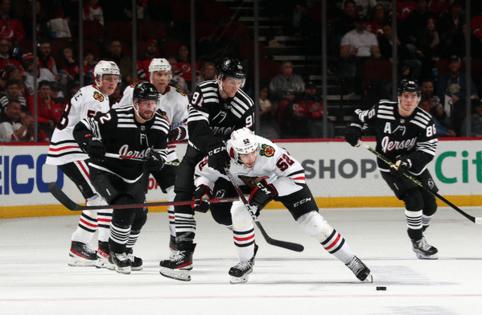 NEWARK, N.J. — When the Chicago Blackhawks signed Max Domi and Andreas Athanasiou to one-year contracts in July, they knew one or both might draw some trade buzz down the line.

That buzz is here for Domi.

Over the weekend, ESPN’s Kevin Weekes suggested the Edmonton Oilers could be interested buyers. The Oilers might be without forward Evander Kane until February or March after his left wrist was cut by a skate blade during a game against the Tampa Bay Lightning on Nov. 8.

Domi acknowledged hearing the rumors but downplayed them to the Tribune before Tuesday’s 3-0 loss to the New Jersey Devils at the Prudential Center.

“It’s all noise to me, man,” he said. “Honestly, I’m just trying to be present, wherever my two feet are right now, and help this team win as much as I possibly can and (leave) everything else to kind of take care of itself.

“But it’s a good thing that people are talking about it.”

Domi has nine goals and 10 assists in 25 games with the Hawks. Entering Tuesday’s game, he was shooting at a career-high rate of 17.6%, and his 57.7% faceoff percentage also would be a career best.

And his $3 million deal expires after this season.

He said he doesn’t believe his trade value is higher than it was last season, when the Florida Panthers acquired him in March from the Columbus Blue Jackets in a three-team trade.

“When you have short-term deals like that (in Montreal, Columbus and Chicago), it’s what’s going to happen when you’re on an expiring deal,” Domi said. “The same thing last year when I was in Columbus, I knew I was going to get traded. I made it pretty clear that I wasn’t going to re-sign there. … In this situation, when you have a one-year contract, anything can happen. It’s kind of out of your hands.