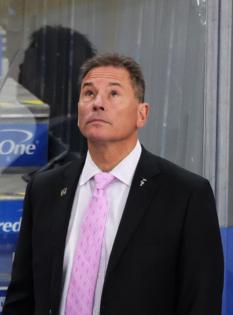 Left wing Reilly Smith scored in the fifth round of a shootout and the Golden Knights defeated the Boston Bruins 4-3 Monday in TD Garden.

The Knights were up 3-0 in the second period despite being without center Jack Eichel (lower-body injury) and defenseman Alex Pietrangelo (personal reasons). The Bruins fought back to tie things 3-3 with a power-play goal 3:08 into the third.

The game was coach Bruce Cassidy’s first at TD Garden since being fired by Boston on June 6. Cassidy led the Bruins to six playoff appearances in his six seasons in charge, and came on win shy of lifting the Stanley Cup in 2019.

WINNIPEG, Manitoba — Two periods of excellent goaltending and special teams for the Blues went up in smoke in a few minutes' time in the third period.

After taking a 2-0 lead early in the third, the next four goals ...Read More

Few things in sports were as memorable as a rush up the ice by the Chicago Blackhawks with Bobby Hull handling the puck at Chicago Stadium.

A goal by the man with the hardest shot anyone had seen, combined with the ...Read More