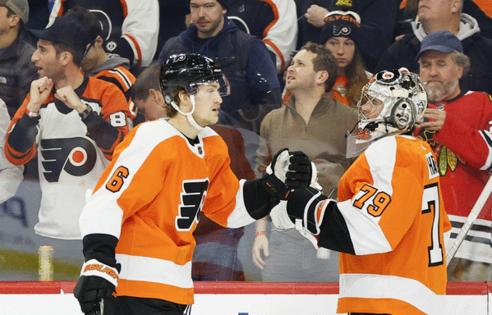 PHILADELPHIA — No captain Gabriel Landeskog, no winger Valeri Nichushkin, no winger Artturi Lehkonen for the reigning Stanley Cup champion Colorado Avalanche, due to injury. That was (almost) no problem for the Flyers, who have been decimated by injuries of their own for the last two seasons.

The Avalanche showed up to the Wells Fargo Center on Monday night without seven key players and lost an eighth in center Nathan MacKinnon in the first period. The win-deprived Flyers pounced on their prey and handed them a 5-3 defeat, marking the Flyers’ second victory in their last 14 games. They received scoring contributions from the usual suspects — defensemen Travis Sanheim, Tony DeAngelo, and winger Owen Tippett — and an unusual one — forward Tanner Laczynski, who checked back into the lineup on Monday after sitting out as a healthy scratch on Saturday against the New Jersey Devils.

However, the Avalanche mounted a late push with the Flyers up, 4-1, as winger Mikko Rantanen scored with just over two minutes remaining in the third and center Alex Newhook cut the Flyers’ lead to one with a minute and a half left. The Flyers closed out the scoring with a Travis Konecny empty-net goal.

DeAngelo’s go-ahead goal in the second period came on the Flyers’ power play, which was ranked last in the league (14.10%) prior to the game. Tippett also cashed in on the man advantage to put the Flyers up, 4-1, scoring on a wide-open net off of a winger Scott Laughton bank shot off the end boards. The Flyers’ power play is now 3-for-7 in their last two games after going 0-for-19 in the seven games prior.

While they secured the win, the Flyers lost Laczynski in the third period to an apparent lower-body injury.

Although goalie Carter Hart allowed three goals on 18 shots against the Devils, which included a goal off of a mishandled puck behind his net, coach John Tortorella expressed confidence in his starter and went back to him against the Avalanche. Hart’s response was mostly positive, as he denied 29 of 32 shots though three periods.

One of Hart’s best saves of the night came with four and a half minutes remaining in the second period when he robbed winger Martin Kaut on a breakaway with his right pad to keep the Flyers up, 3-1. The breakaways didn’t stop for the Avalanche — defenseman Cale Makar had one of his own off of a Flyers turnover seven and a half minutes into the third period, but Hart deflected his shot with his glove. Winger Charles Hudon attempted to score on a wraparound off the rebound, but Hart answered the call and made the save.

In the Flyers’ last victory over the New York Islanders on Nov. 29, defenseman Travis Sanheim settled the bench in the first period following an Islanders’ go-ahead goal by scoring one shorthanded of his own. He continued to exhibit leadership on Monday night in a similar fashion against the Avalanche, making a big play following the Avalanche’s first period power-play goal.

Less than four minutes after the Avalanche went up 1-0, Sanheim intercepted an errant pass in the neutral zone and carried the puck into the zone with speed. The sequence ended with Sanheim receiving the puck at the offensive blue line, wiring a wrist shot bar-down through traffic on Avalanche goalie Alexandar Georgiev to tie the game, 1-1. Later in the period when Hart was under siege, Sanheim swept a puck away that sat on the goal line off of a Hudon shot to keep the score even.

Stay out of the box

Going into their matchup against the Avalanche, it was imperative that the Flyers stay out of the penalty box. Despite dealing with a litany of injuries, the Avalanche boasted the best power play in the league that had a 32.5% success rate prior to Monday night. Meanwhile, the Flyers’ penalty kill was ranked 24th in the league (74.36%). But just three and a half minutes into the first period, winger Kevin Hayes committed a holding penalty on MacKinnon to put the visiting team on the man advantage.

Seventeen seconds after the face-off, Newhook tipped a Makar shot from the point past goalie Carter Hart, as the Avalanche took a 1-0 lead. The Flyers continued to play with fire in the first period when center Tanner Laczynski went to the box for tripping. However, Hart came up with a pair of saves on Avalanche winger J.T. Compher and defenseman Devon Toews and the Flyers killed the penalty. The Flyers didn’t clean up their act as the night went on, but the penalty kill went 4-for-5 on the night.

The Flyers conclude their five-game homestand on Wednesday when the Washington Capitals come to town at 7 p.m.

WINNIPEG, Manitoba — Two periods of excellent goaltending and special teams for the Blues went up in smoke in a few minutes' time in the third period.

After taking a 2-0 lead early in the third, the next four goals ...Read More

Few things in sports were as memorable as a rush up the ice by the Chicago Blackhawks with Bobby Hull handling the puck at Chicago Stadium.

A goal by the man with the hardest shot anyone had seen, combined with the ...Read More