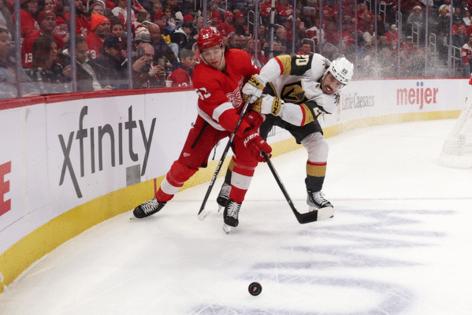 DETROIT — What could have been a successful five-game homestand for the Red Wings turned out to be just average.

Vegas scored early Saturday, and never lost control, as it defeated the Wings, 4-1.

Especially with a difficult four-game trip beginning Sunday in Columbus.

Just as the Wings' power play expired, the Knights' Nicolas Roy stripped the puck from Lucas Raymond and launched an outlet pass to Kessel, who was coming out of the penalty box.

Kessel skated in on a breakaway and snapped a shot past Husso.

Sundqvist had just cut the Knights' lead to 2-1 with his fourth goal and third in two games. Dominik Kubalik found Sundqvist alone in front of the crease and Sundqvist knocked the puck past goaltender Adin Hill.

Chandler Stephenson wheeled in the corner and threw the puck out front, where Kessel, alone at the post, tapped the puck past Husso just 1:04 into the game.

That lead held until Vegas extended the margin to 2-0 on Marchessault's power-play goal.

After the Wings' rush was thwarted on one end, Vegas' Mark Stone started a break the other way, with Stone finding Shea Theodore, who found Marchessault trailing. Marchessault snapped a shot past Husso at 7:16 of the second period.