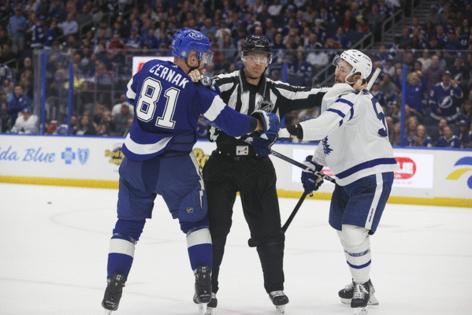 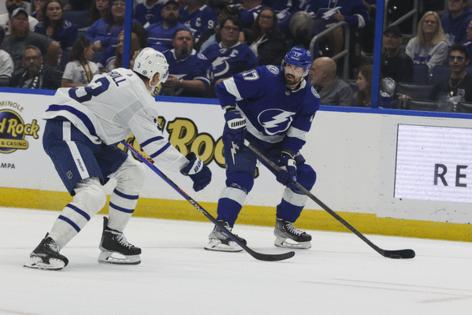 TAMPA, Fla. — The Lightning’s first game against the Maple Leafs since they eliminated Toronto in seven games in the first round of the 2021-22 postseason was a reminder of how evenly matched these teams are.

Saturday night’s meeting at Amalie Arena was back and forth, and needed overtime to be decided on Alex Killorn’s game-winner 33 seconds into the 3-on-3 extra session, giving the Lightning a 4-3 win.

The Lightning (15-8-1) have now won five of their six overtime games this season.

A Maple Leafs go-ahead goal was taken off the scoreboard with 4:04 remaining in regulation when a video review ruled that Toronto captain John Tavares kicked the puck into the net in the middle of a crowd in the crease.

Toronto forward Mitchell Marner, who set a franchise record for points his in 19th straight game, tied the score with his second goal of the night on a Maple Leafs power play with 8:05 left in regulation.

After allowing a short-handed goal early in the game, the Lightning power-play unit scored two goals in the first four minutes of the third period to take a 3-2 lead.

Ross Colton scored the go-ahead goal on the power play, launching a one-timer from below the right circle past Toronto goaltender Matt Murray at 4:34 mark in the third the for his second goal in as many games.

It is the 10th straight game in which the Lightning have scored a power play goal.

Nikita Kucherov scored the game-tying goal 1:51 into the third period on a 4-on-3 advantage. Kucherov calmly skated to the top of the right circle, surveyed the ice in front of him, and wristed a shot past a Corey Perry screen and by Toronto goaltender Matt Murray on the short side.

Perry, playing in his 1,200th career game, had the secondary assist on both power pay goals.

As times ticked down in the second period and the game tied at 1, the Lightning were applying pressure in the offensive zone. Kucherov’s shot pinged off the post — the second time in the period the Lightning hit iron.

With 3:32 left in the period, Brayden Point filled the net in front, taking a centering pass from Kucherov and beating Leafs goaltender Matt Murray, but the score was taken off the board when a Toronto challenge found that Brandon Hagel was offsides on the entry.

Moments later, Anthony Cirelli — playing in his first game since the Stanley Cup Final — charged toward the net, but collided with Murray in the crease; he was run into the goaltender from behind by Tavares. That prompted a post-whistle dustup after the goal became dislodged.

Just 11 seconds later, Toronto’s William Nylander scored to give the Leafs a 2-1 lead.

Vladimir Namestnikov’s first goal of the season tied the score at 1 at the 7:40 mark in the second period. Erik Cernak’s shot attempt from the right point was blocked, and after disappearing into traffic, the puck rolled between the hashmarks, where Namestnikov collected it and wristed a shot top shelf.

Toronto went up 1-0 when Mikhail Sergachev sent a drop pass behind him to no one — the only person there was the referee — on the power play and Marner scooped it up in the Lightning zone. His first attempt on goal went high, but he capitalized on his second, scoring a short-handed goal to open the scoring 5:18 into the game.

The night opened with a pregame ceremony celebrating captain Steven Stamkos for becoming the first player in franchise history to reach 1,000 career points. Stamkos was presented with a driver and bottle of wine from teammates Killorn and Victor Hedman, and Lightning owner Jeff Vinik gave him a gold hockey stick, followed by mascot Thunderbug, who presented gold mini sticks to Stamkos’ 3-year-old son Carter and 1-year-old son Chase.