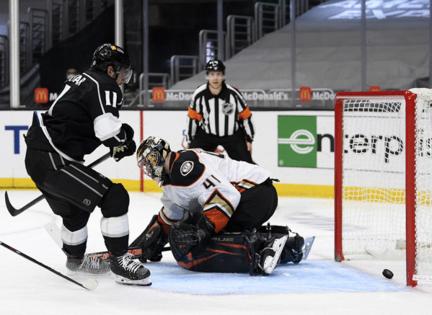 LOS ANGELES — After a day of reckoning on Wednesday, it was a night of resilience on Thursday, when the Los Angeles Kings surmounted a two-goal deficit and some poor puck luck to upend the Arizona Coyotes, 5-3, at Crypto.com Arena.

A day earlier, practice was canceled abruptly in favor of an all-hands-on-deck meeting during which General Manager Rob Blake addressed the entire roster and coaching staff.

And there was more than just talk.

Struggling goalie Cal Petersen, once anointed the Kings’ netminder of the future, was waived and sent to the American Hockey League so he could play consistently and regain consistency. Joining him were forward Rasmus Kupari and defenseman Jordan Spence, while goalie Pheonix Copley, forward Tyler Madden, winger Samuel Fagemo and defenseman Tobias Bjornfot were called up to the Kings. It was a fitting flurry of swaps between the Kings and their top minor-league affiliate ahead of the Kings’ “Ontario Reign night.”

Fagemo and Bjornfot dressed Thursday and contributed an assist apiece. It was the captain, center Anze Kopitar, leading the way with the Kings’ first goal and the game-winner. Wingers Trevor Moore, Carl Grundstrom and Kevin Fiala also scored, with Fiala chipping in an assist. Jonathan Quick made 18 saves for the Kings, who had dropped five of their previous six games, including a wild 9-8 overtime defeat against Seattle on Tuesday.

Wingers Christian Fisher and Matias Maccelli each scored a goal for Arizona, as did center Nick Bjugstad. Karel Vejmelka saved 27 of 31 shots. Maccelli added an assist while center Dylan Guenther had two.

Late in the game, the Kings withstood a push from Arizona, including their lone shot on goal in the third period, before they saw Fiala ring the post with a shot and then seal the deal with an empty-net goal with 1:58 left.

Kopitar put the Kings ahead for good 5:22 into the final frame. During a four-on-four sequence, he drove hard on defenseman J.J. Moser, beating him badly to the outside before cutting into the center to let a shot rip to the far side. It was his seventh goal of the season and his fourth in as many games, as well as his 89th point in 86 career games against the Coyotes. That’s the most he has scored against any team and more than any other player has scored against Arizona.

In the second period, the Kings fell down by a pair of goals and rallied back to even through 40 minutes.

The fourth line generated a two-on-one rush on which Grundstrom elected to keep the puck and fire high to the short side, knotting the score at three with 1:32 to play. Fagemo’s assist on the play was his first NHL point.