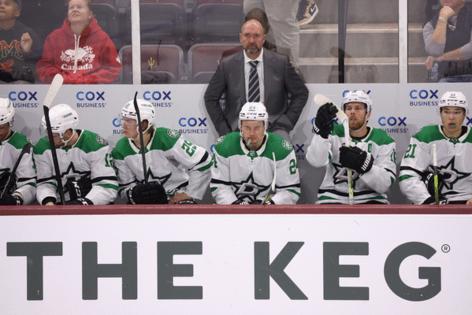 DALLAS — It was Jason Robertson Night for the Dallas Stars and the Ducks were reduced to bystanders on Thursday night at American Airlines Center.

The Arcadia native recorded his third career hat trick – scoring once in each period – to lead the Stars to a 5-0 victory over the Ducks. Robertson extended his points streak to 17 games.

Goaltender Jake Oettinger made 31 saves to record his second shutout of the season and the fourth of his career. He is 4-0-0 in his career against the Ducks. The Ducks have lost 10 of their last 12 games overall and are 2-8-1 on the road this season.

Back to the present …

The Stars, who have the league’s third-best power play, went 2 for 4 with the man advantage. Dallas scored once in the first period, added two in the second, and two more in the third.

Robertson completed the hat trick, on the power play, at 1:23 of the third period, beating Ducks goalie Anthony Stolarz low blocker side with a wrist shot from the top of the right circle. It was his 22nd goal of the season, which leads the NHL.