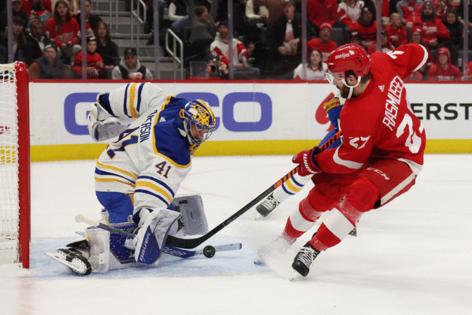 DETROIT — Different type of game, but same frustrating result for the Red Wings.

After losing badly to Buffalo on Halloween night, the Wings staged a fine rally Wednesday, forcing overtime, but ultimately lost, 5-4 in the shootout.

Buffalo's Jack Quinn was the lone goal scorer in the shootout, clinching the Sabres' win.

David Perron and two Oskar Sundqvist goals in the third period tied the game 4-4 after the Wings looked headed for another disappointing loss and trailing 4-1.

The Wings had a 1 minute, 27 second two-man advantage in the final two minutes of regulation time, but the Wings failed to convert, capping an 0-for-7 night on the power play and forcing overtime.

Jonatan Berggren opened the scoring just 1 minute, 20 seconds into the game, but Buffalo answered with four unanswered goals before Perron scored his seventh goal, midway in the third period.

Sundqvist then scored two goals 1:50 apart, his second and third goals of the season. On the second, the game-tying goal, Andrew Copp won the faceoff and Sundqvist gathered the puck, whistling a shot from the hashmarks past goaltender Craig Anderson, tying the game 4-4.

Goaltender Alex Nedeljkovic got his first start since Nov. 12 (he did relieve Ville Husso Monday), struggled to open the game but rebounded to keep the Wings close.

Buffalo dominated the special teams with power play and short-handed goals, while the Wings were 0 for 6 on the power play.