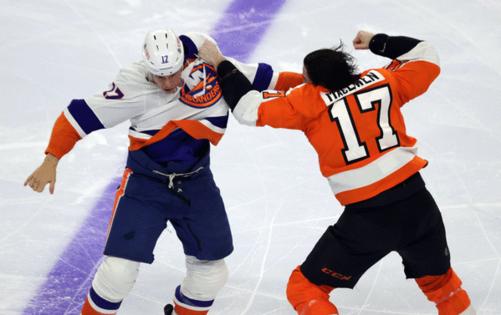 PHILADELPHIA — Following the fists of Zack MacEwen and Nicolas Deslauriers, the Flyers snapped their 10-game losing streak with a 3-1 win over the New York Islanders on Tuesday night.

When the Flyers played the Islanders on Saturday, the 5-2 loss ended with multiple scrums. With a second game in a row against the Islanders, John Tortorella was asked before Tuesday’s game if he expected the scrums and physical play to carry over.

“I think that’s part of hockey,” Tortorella replied. “We’re gonna play our game. I think that has to be part of our game.”

The Flyers took it literally, with MacEwen and Deslauriers each dropping the gloves in the first eight seconds. They were premeditated fights — nothing had happened on the ice yet to spark the m— and the Flyers ended up with two in the box for fighting and a loud home crowd. The two fights pushed the Flyers into first for most team fights in the NHL at 17.

The fisticuffs got the crowd going, and the Flyers played well in the first. Their two ensuing goals carried them through the following 40 minutes, and an empty net goal sealed the deal for the 3-1 win.

From start to finish

Despite a weak start, the Flyers outplayed the Islanders when they faced them Saturday. But a lapse in the third led to three straight goals and a 10th-straight loss. Preparing to face them again Tuesday, Tortorella said their start would be important.

The Flyers once again started out behind, giving up a 5-on-3 goal, but they bounced back quickly with a shorthanded goal just over a minute later. With strong defense, they limited the Islanders to nine shots and led with 12. They had a 2-1 lead after the strong period.

The second was ugly, but it was equally ugly on both sides of the ice. The Flyers couldn’t get much going, but they kept the Islanders from building anything, preserving their lead.