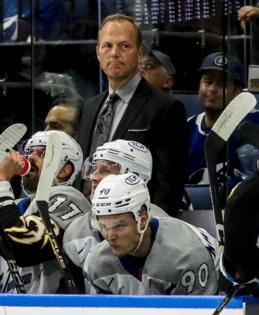 BUFFALO — Given how much time the Lightning spent in their own zone, they were probably lucky to be tied with the Sabres midway through the third period Monday night.

Then, things got a little crazy.

After falling behind by two goals, Tampa Bay rallied to tie the game in the final six minutes of regulation.

Nikita Kucherov’s shot on goal with 2:03 remaining deflected off Brandon Hagel, giving the Lightning their third power-play goal and tying the score.

Then, Steven Stamkos won it with 2:16 left in overtime, his second goal of the game and the third straight for the Lightning giving them a 6-5 victory.

With Buffalo leading 4-3 — and moments after Alex Killorn hit the post — the Lightning got caught pressing in the offensive zone. It created a 2-on-1 rush the other way that culminated with Jeff Skinner roofing a shot shortside over goaltender Brian Elliott’s left shoulder from a tight angle with 5:41 left in regulation.

Earlier, Tampa Bay tied the game at 3 with 3:24 left in the second period on a Brayden Point power-play goal, his second of the night.

The goal came after ucherov drew a high-sticking penalty on Mattias Samuelsson, prompting Kucherov to fling off his gloves and hold his face.

The crowd at KeyBank Center didn’t like Kucherov’s display — or his attempt to return to the ice immediately after skating to the bench in pain — and booed him loudly every time he touched the puck during the ensuing power play.

In the middle of those boos, Kucherov threaded a touch pass to Point in the bumper position that Point snapped into the back of the net.

Though they were being outshot 12-4, the Lightning took a 2-0 lead into the final minutes of the first period.

But the Sabres stormed back to take a 3-2 lead, including two quick goals in the last 2:06 of the opening period to tie the game.

The Lightning had given up far too many scoring opportunities in the first period. They struggled to get the puck into their offensive zone with sloppy passing.

Tyson Jost put the Sabres up 3-2 just over nine minutes into the second when a rebound hit off Elliott’s pad and on to his stick. Lightning defenseman Mikhail Sergachev had lost his stick and couldn’t make a play on Jost’s shot.

With Tampa Bay leading 2-0, Tage Thompson deked Elliott and tucked the puck inside the left post. Less than a minute later, Jack Quinn finished a 2-on-1 rush, found wide open in front by JJ Peterka to tie the game at 2.

After Point opened the scoring just under eight minutes into the game on the power play, Corey Perry scored his first goal in 15 games to put the Lightning up 2-0.

Elliott fought off several tough shots in the first, including a shot by Peterka that he stopped with his blocker.