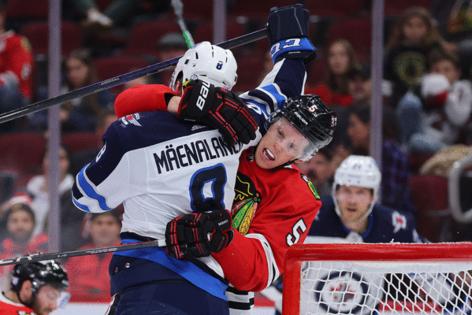 So do streaks, and the Chicago Blackhawks are learning both are true during a winless skid that extended to seven games (0-6-1) with Sunday night’s 7-2 loss to the Winnipeg Jets at the United Center.

The Hawks clawed back to tie the Montreal Canadiens on Friday, but ex-Hawk Kirby Dach came back to haunt them in the shootout.

They built a three-goal lead in the third period of a road game against the Dallas Stars on Wednesday, then collapsed in epic fashion, giving up five unanswered goals in the final 10 minutes.

They squandered a three-goal rally against the Pittsburgh Penguins on Nov. 20 and simply got hammered 6-1 by the Boston Bruins on Nov. 19.

“We don’t like losing, like anybody,” Hawks coach Luke Richardson said. “But we find a lot of good things in our game the last three games.”

No one expected the Hawks to be a contender — the roster isn’t constructed to be one — but they did have a four-game winning streak early this season. They’re 2-8-4 since.

They’ve gone from a scrappy, ragtag bunch that could mount a rally to giving up rallies with increasing frequency. Earlier, even the losses looked like possible wins if a puck or two flipped in their favor.

Now it seems they periodically lose that punch, or if they do have a win in hand, it’s only a matter of time before they lose their grip.

“Last game, we just didn’t have energy the whole game,” Richardson said. “Every once in a while, it catches up to you in the season, and we found a way to play the system, play smart and grind out to get to overtime.”