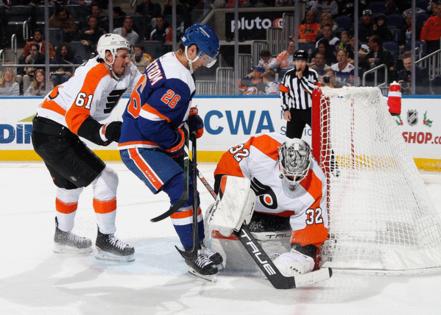 ELMONT, N.Y. — Going into the third period tied, 2-2, with the New York Islanders on Saturday night at UBS Arena, the Flyers were in win-a-period, win-a-game, stave-off-a-10-game-losing-streak mode.

It took just 22 seconds early in the final frame for that prospect to utterly collapse.

The Islanders regained the upper hand in that span thanks to goals from Brock Nelson and Anthony Beauvillier, propelling them to a 5-2 win over the Flyers. The loss extends the Flyers’ losing streak to 10 games, marking the third time a skid has reached double digits in the last two seasons. The first 10-game losing streak spanned Nov. 18-Dec. 8, 2021, and the 13-game losing streak that ran from Dec. 30, 2021-Feb. 2 and tied a franchise high.

With eight minutes remaining in the third, Zach Parise pushed the game further out of the Flyers’ reach with a power-play goal. Tensions between the teams culminated with a scrum in the final minutes of the game, as defenseman Tony DeAngelo dropped the gloves with Islanders winger Oliver Wahlstrom.

Going into Saturday night’s game, the Flyers have been struggling on the power play and the penalty kill. In their last nine games, the Flyers have capitalized on just 7.4% of their power-play opportunities (2 of 27, ranking 32nd in the NHL). The Flyers have allowed nine power-play goals against on 24 short-handed stints in that same span (62.5%, 32nd). Those terrible trends continued against the Islanders.

On their first power play of the night in the second period, the Flyers had a difficult time on their zone entries and only managed on shot on goal through two minutes. A turnover at the blue line led to a short-handed scoring opportunity for Nelson in the waning seconds of the power play, but goalie Felix Sandström denied him. The Islanders eventually capitalized on another turnover in the second period while on the man advantage themselves. Center Morgan Frost failed to clear the puck from the zone, turning it over to Islanders defenseman Ryan Pulock in the high slot. He found Parise down low, putting the puck in the five-hole past Sandström to tie the game, 2-2.

Through three periods, the Flyers went 0 for 2 on the power play and 1 for 3 on the penalty kill.

Hayes still has it

Through the first 17 games of the season, forward Kevin Hayes was a mainstay on the Flyers’ top line at center, typically flanked by wingers Travis Konecny and Scott Laughton. However, after Konecny and Laughton sustained upper-body injuries, coach John Tortorella has shuffled the lines, placing Hayes up and down the lineup and shifting him occasionally to wing.

Tortorella opted to place Hayes on the third line on Saturday at right wing, a rarity for the nine-year NHL veteran, alongside center Lukáš Sedlák and left winger Joel Farabee. While Tortorella hasn’t always been high on Hayes’ defensive play, Hayes still has been bringing the production on offense. He factored in on the Flyers’ first goal of the night in the first period on Saturday by setting up Sedlák for a tap-in goal past goalie Semyon Varlamov to tie the game, 1-1. Now, Hayes has nine points in his last nine game (four goals, five assists).

Sedlák in the zone

Aside from putting the puck in the back of the net, Sedlák’s efforts on entries helped the Flyers create scoring chances in the offensive zone. On his own goal, Sedlák carried the puck into the zone with speed. His entry and puck protection spurred a passing sequence that involved four of the five players on the ice and ended with his tally.

In the second period, Sedlák entered the zone with speed again, passing the puck to Hayes. A shot from Hayes bounced off of Varlamov, but Farabee collected the loose puck and scored. While Sedlák didn’t put the puck on net aside from his goal, he still was a huge boost to the Flyers offensively with his ability to get them in the Islanders’ zone in the first place. The third line combined for the Flyers’ only goals of the night, but their efforts weren’t enough to overcome the Islanders.

The Flyers return to the Wells Fargo Center on Thursday to face the Islanders again at 7 p.m.