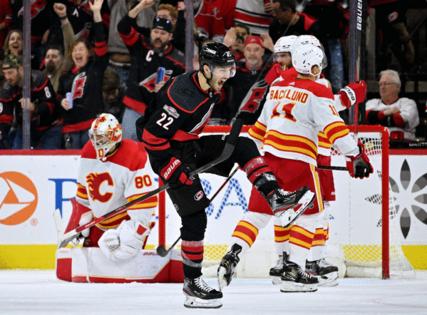 RALEIGH, N.C. — The Carolina Hurricanes powered their way out of a five-game winless streak Saturday.

Martin Necas and Brett Pesce each scored on the power play as the Canes fought past the Calgary Flames, 3-2, at PNC Arena.

After going six games without a power-play goal, the Canes scored twice Friday against the Boston Bruins — albeit in a 3-2 overtime road loss — and then picked up another two at home with the man advantage.

The Canes’ Seth Jarvis scored an even-strength goal in the first for the Hurricanes, who were 0-1-4 in their last four games, losing four times in OT.

Both goalies, the Canes’ Antti Raanta and the Flames’ Dan Vladar, had some big stops in the fast-paced game as the Flames ended a six-game road trip.

Quick takeaways from the game

— The Canes had gone through a stretch of 239:14 without an even-strength goal before Jarvis scored in the first. Nice play by defenseman Brent Burns, who skated into the left circle and found an open Necas by the crease.

— Andrei Svechnikov is a good passer but has a tendency to also make some sloppy ones. He assisted on the Necas power-play goal in the second but later had a turnover that set up the Flames’ Tyler Toffoli for a breakaway score and 2-2 tie.

— Yes, the guy they called “Svech” again tried the move some now call simply the “Svech” — the lacrosse move Svechnikov has twice converted the often-imitated move in his NHL career. He’s still looking for a third.

— There were questions about Raanta’s availability before the game. Canes coach Rod Brind’Amour did not fully commit to Raanta starting before the game, saying, “We’ll see.” Pyotr Kochetkov had started four straight — including Friday’s overtime loss at Boston — before the Flames game as Raanta dealt with an issue that occurred in the morning skate before the Arizona game.

— It has been a tough go for veteran Paul Stastny much of this season, his first with the Canes. Stastny, who had 21 goals last season, has five assists in 21 games for Carolina but might have played his most complete game Saturday. The fourth line, centered by Stastny, kept the puck in the offensive zone and created some extra work for Vladar. Stastny assisted on Pesce’s goal.

— The Hurricanes announced Saturday that former goalie Cam Ward had been elected to the team’s new Hall of Fame as part of the inaugural class. Brind’Amour, Ron Francis and Glen Wesley earned automatic induction but Ward was the first to be elected for induction. No-brainer of a decision. Played 13 seasons, so vital in Canes’ run to the 2006 Stanley Cup title.

SEATTLE — One of the few memorable Seattle Kraken highlights of this game came when notoriously short-fused defenseman Will Borgen drew first-period applause for one-handedly throwing a pesky opposing forward to the ice....Read More

SUNRISE, Fla. — At the back of the Florida Panthers’ power play, Brandon Montour begged for help as he stared down the inevitability of a 2-on-1 rush for the Los Angeles Kings. The Panthers’ best chance to pull off a...Read More

ELMONT, N.Y. — The Red Wings head into the All-Star break still searching for a lengthy win streak and concrete momentum.

The inability to string some victories together is costing the Wings a chance to move up the ...Read More

RALEIGH, N.C. — There are few slow nights or easy games in the NHL.

The Carolina Hurricanes faced the San Jose Sharks on Friday at PNC Arena — the Canes with 30 wins and 68 points this season, the Sharks with 14 and ...Read More

SEATTLE — After suffering an apparent injury following a hit Wednesday, Kraken All-Star Matty Beniers was absent at Friday’s morning skate and will miss games Friday and Saturday before a break for the annual NHL ...Read More

DENVER — The Avalanche made a six-layer tank sandwich.

Six consecutive wins in which they never trailed were surrounded by losses to NHL bottom-feeders: Chicago before the beginning, and now Anaheim at the end.