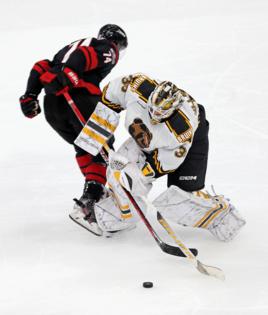 BOSTON — The Bruins earned the record they were going for on Friday, but they had to work overtime to get it — literally and figuratively.

The Bruins wiped out a two-goal deficit and David Pastrnak scored the game-winner with 1:41 left in overtime to lift the Bruins to 3-2 victory over the Carolina Hurricanes at TD Garden, setting the NHL mark for the most consecutive home wins to start the season at 13-0.

It was an electrifying afternoon, but it may turn out to be a costly one.

The Bruins lost goalie Linus Ullmark, arguably the MVP in their spectacular start to the season, at the 6:57 mark in the third period in a mad scramble. After making a spectacular glove save while on his belly, Connor Clifton crashed on top of him. It was difficult to tell what exactly Ullmark hurt, but he was done for the day with an upper body injury.

The Bruins tied it up at 10:27 on a disputed goal. David Krejci scored his second goal of the game on a long-range shot with Nick Foligno battling in front with Brett Pesce. Referee Francis Charron initially waved it off for goalie interference on Foligno, who argued emphatically against the call. Coach Jim Montgomery challenged it and, after a lengthy review, the officials saw what Foligno knew, that Pesce had pushed him into the crease.

The Bruins pushed hard to get the go-ahead goal, subsequently giving up a couple of Grade A chances. Brandon Carlo broke up a 2-on-1 and then Jeremy Swayman stopped Martin Necas on a clean break-in with 2:04 left in regulation.

The Bruins got a late power play when Andrei Svechnikov shot the puck into the crowd with 1:01 left in the regulation. But the Bruins could not capitalize either in regulation or on the 4-on-3 in OT.

But after the Canes took a too-many-men penalty, Brad Marchand teed up Pastrnak for his patented one-timer, his 14th goal of the season.

The Hurricanes had owned the Bruins in the regular season last year, posting a 3-0 record while outscoring the Bruins 16-1. The first period looked familiar.

It also bore a resemblance to Wednesday’s game in Florida when they took seven penalties and allowed three power-play goals. The Bruins took a total of four minors in the first and Carolina, which came into the game with the league’s 30th ranked power play, scored on its first two man advantages.

On the first one, Tomas Nosek had a chance to clear the puck but Brent Burns was able to just keep it in at the blue line. Shortly after that, Stefan Noesen was able to tuck it past Ullmark at 6:34 and the Bruins were in a position they found themselves against the Canes all last year — playing catch-up.

The Hurricanes then handed the Bruins their first two-goal deficit on home ice this year when they cashed in on a Craig Smith hooking penalty at 15:05. Ullmark got a piece of Seth Jarvis’ shot with his blocker but the puck took a funny bounce off the glass. Jesper Kotkaniemi was able to grab the loose puck and tuck it behind Ullmark, who was caught going the wrong way.

The Canes had a chance to break the game open when Pastrnak took a double minor high-sticking penalty on Kotkaniemi. But the Bruins were able to kill off the first one and then the Canes took two consecutive penalties themselves to set the Bruins up for a short 5-on-3 early in the second.

But the Bruins could not cash in on the two man-advantage, nor could they make Carolina pay for another infraction Jack Drury committed shortly after the Hurricanes got back to full strength.

The Canes were doing a good job of getting their sticks in lanes and frustrating the Bruins in the offensive zone, but the Bruins began to take the body and got some life in the building. What really electrified the crowd was when Jaccob Slavin poked the puck away from Brad Marchand high in the Carolina zone and knocked it out of the zone, creating a race for the loose puck between himself and Ullmark. The netminder beat Slavin to the puck just inside the Bruin blue line, protected the puck and then moved it to a teammate.

And just when it looked like the Bruins would head into the second intermission with the 2-0 deficit, they finally broke through. Pesce tried to mush the puck up along the left boards but he was sealed off by Pavel Zacha, allowing Pastrnak to pick up the puck and feed a wide open David Krejci in front of the net. The veteran calmly waited to pick his spot and beat goalie Pyotr Kochetkov with 31 seconds left in the period, getting the Bruins to within striking distance for the third period.