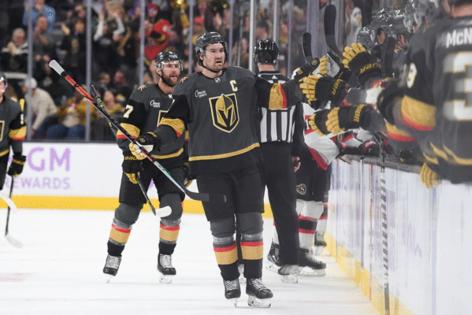 William Carrier and William Karlsson each authored spectacular goals and the Golden Knights defeated the Ottawa Senators 4-1 at T-Mobile Arena on Wednesday.

Carrier scored while falling to the ice in the second period despite needing to plow through three defenders to get to the net. Karlsson spun around to shake a defender before firing an incredible backhand shot past goaltender Cam Talbot in the third.

Knights goaltender Logan Thompson defeated the Senators for the second time this season to improve to 7-1 in November. Captain Mark Stone also scored against his former team to extend his point streak to four games.

ST. PAUL, Minn. — The Wild didn't have Ryan Reaves in action when the puck dropped against the Jets hours after trading for the veteran forward, but they played like they did.

After adding Reaves to shore up their size ...Read More

PITTBURGH — Evgeni Malkin got the winner as the Penguins beat the Calgary Flames, 2-1, in a shootout Wednesday, in the annual Thanksgiving Eve game at PPG Paints Arena. That extended Pittsburgh’s winning streak to a ...Read More

SUNRISE, Fla. — From the edge of a crease, Matthew Tkachuk watched a twisting puck change directions and fly past the outstretched arm of Jeremy Swayman. Before he did anything else, the All-Star right wing wheeled ...Read More

WASHINGTON — The Flyers maintained a 2-1 lead over the Washington Capitals on Wednesday night at CapitalOne Arena with roughly three minutes remaining in the third period and were on the cusp of snapping their seven-game...Read More

BUFFALO — In what has been the strangest of hockey seasons, the Blues couldn’t flip the script Wednesday at KeyBank Center.

Eight consecutive losses were followed by seven straight wins. But the Blues couldn’t get ...Read More

DETROIT — If the NHL season were to end today, the Red Wings would be in the playoffs.

Now, the Wings have 63 games left so the season's actual end is a long way off. Nobody is getting carried away (well, some on social...Read More