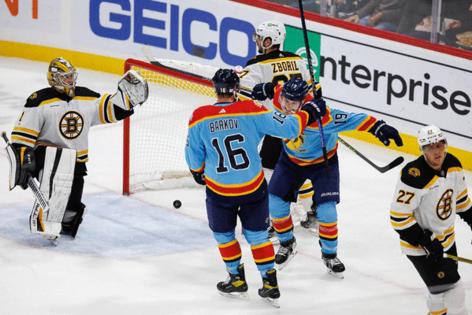 SUNRISE, Fla. — From the edge of a crease, Matthew Tkachuk watched a twisting puck change directions and fly past the outstretched arm of Jeremy Swayman. Before he did anything else, the All-Star right wing wheeled around and pointed his left index finger at Aleksander Barkov.

The star center’s redirection was the third goal of the game for the Florida Panthers — a beauty, just like the other two — and improbably gave them a multi-goal lead on the Boston Bruins in the second period. After spending nearly the entire first period backed up in their own end of the ice and overwhelmed by the league’s best, the Panthers clawed back with one of their most impressive periods of the year. Tkachuk added a fourth goal — again on a power-play deflection — just a few moments before the second period ended and Florida turned a tie game into a three-goal lead at the second intermission.

In the third, the Panthers finished off the 5-2 win in Sunrise to hand the Bruins only their third loss of the season — and their most lopsided defeat yet.

As different as it was from some of its best performances last season, Florida (10-8-2) finally delivered the sort of emphatic performance it made routine a year ago and its two best forwards led the way with three points each.

The second period was the turning point. Even though the Panthers escaped the first in a 1-1 tie, Spencer Knight was essentially the entire reason why. Boston (17-3-0) dominated the opening frame, outshooting Florida 18-8, and easily doubling their offensive zone time, yet the goaltender stopped 17 of 18 shots, and weathered 19 scoring chances and eight high-danger chances to keep the game even. The only goal he gave up came on a 5-on-3, and he and the Panthers then killed off nearly four minutes of power-play time, resulting from a double minor penalty on center Anton Lundell.

Knight, who starred for the Boston College Eagles before beginning his professional career in 2021, finished with 37 saves on 39 shots, allowing only another 5-on-3 goal in the third period.

On offense, Florida’s entire first-period output came in the first two minutes when defenseman Gustav Forsling drew a penalty, and forward Sam Reinhart finished off a pretty passing play from Barkov and Tkachuk to put the Panthers up 1-0 with 19:11 left in the first period.

The second period was a complete flip. The penalties, of course, helped and Florida went 2 for 4 on the power play, but the Panthers also had an 11-2 advantage in 5-on-5 scoring chances in the second, and scored the only even-strength goal of the period when Reinhart’s aggressive forecheck created a takeaway in the offensive zone and a goal for Lundell, putting Florida back ahead 2-1 with 15:19 left in the period.

Barkov and Tkachuk then tacked on power-play tip-in goals in the final five minutes of the period to send the Panthers into the third up 4-1, drawing a standing ovation from the crowd inside FLA Live Arena.

The Bruins put a scare in Florida in the final period and briefly appeared to cut the Panthers’ lead to 4-3 with 3:54 left, but the officials quickly waved off the goal for an illegal hand pass in the offensive zone and Florida sealed the win on an empty-net goal by star defenseman Aaron Ekblad less than two minutes later.

TEMPE, Ariz. — The rink wasn't conventional, and neither was the result.

In the relaunch of their season after an eight-day hiatus, the Wild were upset 3-2 by the Coyotes on Monday at the 5,000-seat Mullett Arena that ...Read More

SUNRISE, Fla. — Matthew Tkachuk was right back on the ice Sunday, a day after winning MVP of the 2023 NHL All-Star Game at the end of a busy week as the league’s unofficial ambassador for its week-long Broward County ...Read More

Patrick Kane didn’t outright say he’s open to a trade to a Stanley Cup contender, but the Chicago Blackhawks star did acknowledge some “potential suitors are “intriguing.”

Kane said he has had ongoing talks ...Read More