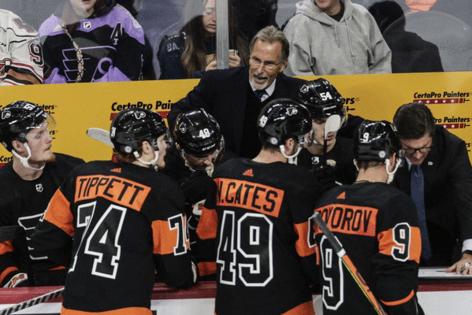 WASHINGTON — The Flyers maintained a 2-1 lead over the Washington Capitals on Wednesday night at CapitalOne Arena with roughly three minutes remaining in the third period and were on the cusp of snapping their seven-game losing streak.

However, Capitals winger Sonny Milano had other plans.

He scored backdoor off the rush to tie the game, 2-2, paving the way to overtime. Ultimately, longtime Capitals captain Alex Ovechkin scored roughly one minute into overtime, handing the Flyers a 3-2 loss with his 790th career goal.

For stretches throughout the night, the Flyers struggled to generate offense. They had two overlapping power plays early in the third period and could not muster a single shot on goal. However, the Flyers capitalized on bounces on both of their goals from centers Morgan Frost and Patrick Brown.

Felix Sandström got the starting nod over Carter Hart, who had played the Flyers’ last four games. Sandström struggled to control some rebounds in the first period, leading to the Capitals’ tying goal.

On the power play, Sandström failed to swallow up Capitals winger T.J. Oshie’s shot from the slot. Ovechkin collected the puck and slipped it beneath Sandström’s right pad. Capitals winger Marcus Johansson, who saw a power-play goal wiped off the board 22 seconds earlier when officials determined he kicked the puck in, deflected the shot over the goal line to tie the game, 1-1.

But Sandström settled down and came up big in the second period, denying all 15 Capitals shots on goal, including a save on an Ovechkin power-play shot from his doorstep.

After scoring twice in the Flyers’ season opener against the New Jersey Devils, Frost has struggled to produce. However, coach John Tortorella moved him up to the top line alongside wingers Owen Tippett and Joel Farabee against the Montreal Canadiens on Saturday and was pleased with their playmaking despite the 5-4 shootout loss.

Frost was rewarded for his recent efforts with an early goal on a generous bounce in the first period against the Capitals. He entered the offensive zone and shot the puck on Capitals goalie Darcy Kuemper. The puck took a bounce off of his blocker, shot up into the air, then bounced over the goal line to put the Flyers up, 1-0.

Provorov puts it in play

For the majority of the second period, the Flyers played on their heels at the mercy of the Capitals’ offensive attack. According to Natural Stat Trick, the Capitals mustered 24 shot attempts in the middle frame, keeping Sandström on alert for an eventful 20 minutes.

But when the Flyers managed to cross the offensive blue line nearly 15 minutes into the period, they made it count. Defenseman Ivan Provorov received a chip pass from winger Nick Deslauriers and put a spin move on Capitals defenseman Trevor van Riemsdyk. He carried the puck to the bottom of the right face-off circle, then fired a backhanded shot toward the crease. The puck deflected off of Brown and past Kuemper to give the Flyers the 2-1 lead. The Flyers finished the second period with just five shots on goal.

The Flyers return to the Wells Fargo Center on Friday for their lone home game of the season against the Pittsburgh Penguins at 5:30 p.m.

TEMPE, Ariz. — The rink wasn't conventional, and neither was the result.

In the relaunch of their season after an eight-day hiatus, the Wild were upset 3-2 by the Coyotes on Monday at the 5,000-seat Mullett Arena that ...Read More

SUNRISE, Fla. — Matthew Tkachuk was right back on the ice Sunday, a day after winning MVP of the 2023 NHL All-Star Game at the end of a busy week as the league’s unofficial ambassador for its week-long Broward County ...Read More

Patrick Kane didn’t outright say he’s open to a trade to a Stanley Cup contender, but the Chicago Blackhawks star did acknowledge some “potential suitors are “intriguing.”

Kane said he has had ongoing talks ...Read More